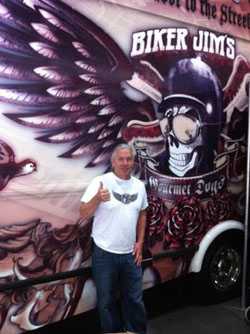 Fresh from the South Point Gourmet Food Truck Fest in Las Vegas this last weekend, Jim "Biker Jim" Pittenger is pretty excited about the success of his latest business venture. Pittenger, who sells exotic sausages —reindeer, rattlesnack and wild boar, to name a few— out of his two food carts and at his restaurant at 2148 Larimer, is now part of the national Mobi Munch concept.

Pittenger was contacted in August by the company that strives to take twelve local food trucks to the national level. Pittenger told Westword that Chairman Bao, a highly popular and well established concept in San Francisco, is also one of the twelve concepts.

The launch of Biker Jim's national presence has already started to happen with test runs in California and Las Vegas, both in his new ex-celebrity chef wheels. Pittenger says the truck has hosted personalities like Mario Batali, Emeril Lagasse and Giada De Laurentiis. [W]