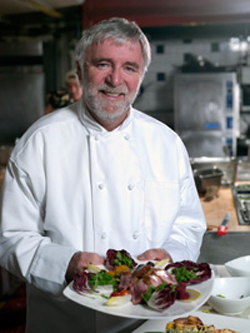 Denver has lost a culinary pioneer as of yesterday's news that Noel Cunningham, chef and owner of Strings, died unexpectedly at age 62. While his restaurant has certainly made a lasting impression on Denver having reached its 25th anniversary last February, Cunningham was also known around town for immense generosity with charities in Denver and Ethiopia. The Denver Business Journal reports that Cunningham, an Irishman, became the youngest chef at the Savoy hotel in London at age 23. He also spent time working in Los Angeles at Harry's Bar & American Grill in Century City and as the executive chef of an exclusive private super club called Touch. After he opened Strings in Denver, he opened 240 Union (which the family still owns) in Lakewood and Trattoria Ciao Baby in Southwest Denver. Service plans have not yet been released. Thanks for leaving Denver a better place, chef.