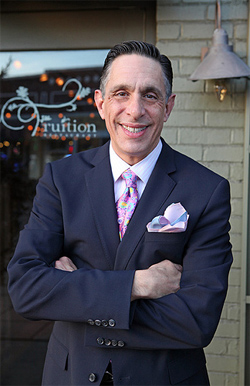 This is The Gatekeepers, wherein Eater roams the city to meet the fine men and women standing between you and some of your favorite dining destinations.

Meet Paul Attardi, partner and GM at Fruition. The guy has been a people-pleaser for many, many years. He opened The Hard Rock Cafe in New York City while he pursued an acting career, quickly realizing that customer service was totally his thing. After a chunk of time working for luxury retailer Salvatore Ferragamo in both New York City and Los Angeles, Attardi moved to Denver with his long-term partner and got a serving gig at Sean Kelly's Aubergine Cafe. After seven years of service, the space was sold to Frank Bonanno and Attardi joined his opening team at Mizuna. It was at Mizuna that Attardi met brilliant chef Alex Seidel, and when Seidel nailed the space for Fruition in 2006, Attardi was one of his first phonecalls. Seidel convinced Attardi, who had moved to North Carolina, to move back to Denver. Fruition opened in 2007 and it has been a hard reservation to book ever since.

We try to have no wait for a table, because I have no bar area for folks to sit at and no waiting area. I'm very strict about reservations. I time my tables so that they'll have enough time to sit and enjoy their experience. You should never feel rushed at a restaurant, especially a restaurant like ours. It's not a 'turn and burn' kind of place. It's small and intimate. It's like being in somebody's home, and you would never rush anybody in your own home, so we give everyone anywhere from two to three hours. The larger the party, the more time. On a really busy night, I'd say people don't have to wait more than 15-20 to minutes for their table.

But can you walk in on a Saturday?
Only if you're there between 5 and 5:30, otherwise, we rarely take walk-ins. If somebody happens to walk in and I've had a cancelation or a no-show, I'll take a walk-in. Because the space is so tight and the demand for tables is so great, you really have to book far in advance, especially on the weekends. We book up a month in advance for weekends. People get really frustrated when they call the day before or the night of and can't get a table for four at 7 p.m., and they'll do that week after week. There's only fifty seats and we go strictly off of reservations.

Have you ever been offered bribes?
Yes.

What kind?
Money. The first month we opened up, one of the waiters was offered a bribe by Jason Sheehan, who was writing for Westword. The waiter was having a cigarette, and he didn't realize it was Jason Sheehan, but he was offered $50 for a table.

Did he get a table?
No. He came in and asked me for a table afterwards, but he didn't have a reservation. People also beg on the phone all the time. We want to accommodate people the best we can, but if I have reservations, they're my first obligation. I mean, there are times where I will squeeze people in. Let me put it this way — there are certain people who are phenomenal regulars, and if there's just two of them, we can squeeze them in. It's easy to squeeze a party of two in, but I can not squeeze in a party of four. There's no such thing.

So you treat your regulars really well?
You have to, but they're really respectful too. They would never think to call me on a super crowded night, but on a Monday or Tuesday, if it's a last minute thing and they pick up the phone and ask if we can fit two at 6:30, it's not a problem.

What's the busiest night?
The nights that book-up first are Sundays.

Why?
Nobody else is open. Very few places are open Sundays and Mondays, and we do bang-up business. Sunday nights are family nights and Monday nights are business meeting nights. When there's a convention in town, you can't get a seat in this restaurant on a Monday.

What's the most bizarre or outlandish accommodation you've had to make?
It's more cute than outlandish, but there was a time when a friend of Alex was getting engaged. He was proposing to his girlfriend and wanted the ring presented on a plate of fried calamari, on one of the tentacles. It was hysterical. She really liked calamari, so when the appetizer came out she had a big tentacle with a diamond ring on it. We do get a lot of engagements, but not with fried calamari. That was a first.

Do you accommodate special diets?
Dietarily, we accommodate a lot of people. Vegans come to us a lot. There's not a vegan menu, but if you call a couple days in advance with a reservation, we'll accommodate.

Even if it's just one diner?
Yes. For vegans we need a couple days of advance notice, but we cook for vegetarians every night. Gluten-free is not a problem whatsoever either.

Tell us about you regulars.
I'd say 60 percent of our business comes from regulars. A lot of the neighborhood people come to us. We get them from all walks of life. We have some older folks who are very wealthy that come in constantly. We also have a lot of younger folks who work in the business. They save their nickels and dimes to come in because this is where they want to have their special occasion.I keep Open Table notes on all of them, keeping track of how many times they've come in, when their birthdays and anniversaries are, what they like/don't like, etc. It's been really helpful because I can remember things like who likes to pour their own wine and who doesn't like ice in their water.

What's the most requested table?
Table 1, behind the podium. Everyone requests that table. It's a nightmare. It's more private and it's right by the window. When they first reviewed us, 5280 wrote that people should request the table behind me, by the window. If there's two regulars who both want that table I have to play what I call "the romance game." I have to appease a lot of people, but I'm good at it. That's why I do what I do.

What kind of VIPS do you get?
The biggest name that we've had in is probably Tony Bennett. We had a lot of the big whigs when the Democratic National Convention was in town. Linda Wertheimer, a reporter for NPR, came in one night. We don't get a lot of the glitzy Denver celebrities, but we do get media types. We have a lot of big money coming through the door, but it's very low-key here. We don't get a lot of sports figures because it's not really that kind of place. Everyone thought we had Tim Tebow in here one night, but the guy was way too small to be Tebow.

Any bands?
I wasn't there, but Nickelback came in with a big group and we had to turn them away. If you don't have the room, you have to turn people down.

So do you take big groups?
We don't take groups bigger than six people. People will ask if they can do two tables of four and I say no because they'll take over the dining room. A party of eight will dominate the dining room and it will back-up the kitchen. We're tiny.

Would you ever do a bigger restaurant? Will you ever expand?
I don't want to because it wouldn't be the same. The food, the ambience and the service would not be the same. I think Alex would like to open another restaurant, but I'm happy with what we have. I love this restaurant. It's my baby. It's never going to be perfect, but I want it to be the best that it can be. I also have a reputation for being at the front of the door, and if I open another restaurant, I can't be in two places at the same time.