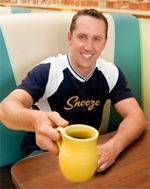 Eater caught up with Snooze founder Jon Schlegel this morning to ask how his six eateries have been doing, including the newest additions in Boulder and San Diego. Schlegel, who prefers to call himself a host (he says he loves working the door, believe it or not), says the Snooze expansion has been a challenging and unbelievable, awesome feat. "It's definitely a gut check when you expand to another city. You arrive and you're like, 'what are we doing? Is this going to work?'" So far, Snooze has totally worked everywhere it has opened. The Hillcrest community is hooked on Snooze pancakes and the Boulder location is killing it on weekends. We had to ask, since he loves being the host, how are people in the morning at all the different locations? And when are we getting more Snooze?

Snooze locations here in Colorado are notorious for having epic waits, especially during brunch. Schlegel says those waits have been the biggest complaint in the 15 years he's been operating Snooze. "People get intimidated by those 45-minute waits, but I think some people are starting to embrace those 45 minutes as time to spend with their families, drink mimosas and sip on bloody marys.

Schlegel says the new San Diego location is packed on weekends but that the party-going community tends to come in a little later than Denver diners. The catch on that statement, however, is that some of the breakfast-goers at the Ballpark location in Denver aren't even going to bed from the night before. As for the locations on Colorado Blvd and in SouthGlenn, the diners are far more family oriented and highchairs go quicker than the first pot of coffee. Boulder, on the other hand, is more of a diverse crowd that's hard to predict. Schlegel says he'll get a feel for the Boulder crowd this weekend when he plays host.

So, will we see more Snooze locations popping up around town or in California for that matter? Not just yet, but Schlegel says they're always looking. "Truthfully, we want to make sure we have San Diego dialed in before we do more."