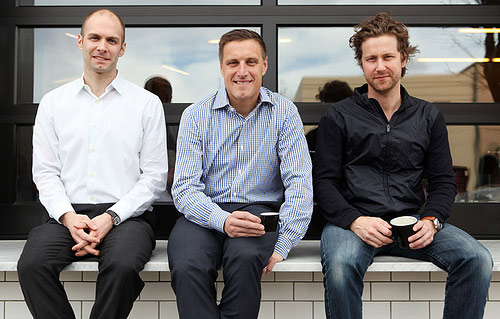 It was a year ago yesterday when Boulder's Pizzeria Locale was born and owners Bobby Stuckey and Lachlan MacKinnon-Patterson could finally toast to their hard work. Opening day was both a thrill and a relief after an epic battle to get Colorado's first Stefano Ferrara pizza oven into the United States. Stuckey and MacKinnon-Patterson, also behind Frasca Food and Wine, did a lot of homework before opening, which included sending long-time Frasca sous chef Jordan Wallace to Naples for over six months. Wallace learned Neapolitan pizza-making down to an art and returned home, ready to rock the pizza oven. Stuckey, MacKinnon-Patterson and general manager Chris Donato tell us about the process of opening their ideal pizzeria and why everyone has an opinion where pizza is concerned.

How did Pizzeria Locale begin? BS: If you look at the progression of Frasca, it's based on a style and a region. We're over in Italy a lot, geeking out about Friuli. We've always talked about other regions of Italy and other styles of food. Pizzeria Locale was really all of us talking about a specific style of pizza, which is as frightening to do as opening a Friulian restaurant. In America we're so passionate about what we grew up with. If you grew up in New York you're used to a certain style, if you grew up in Chicago you're used to a certain style and if you grew up in California you're into to a variation of those styles. It's really scary to do that [Neapolitan] style of pizza. For us, it's the correct style of pizza, but it's not for everybody. To have this soft-in-the-center personal pizza that's uncut is hard for a lot of us to wrap our heads around. I think it was a progression of years of going to Italy. Bruiser [Jordan Wallace] really brought it up a lot too. He told me, "Look, I went to school in Northern Italy, I've done this Friulian cuisine with you and I really want to look into this. I want to do this."

Tell us about Bruiser, since he's not here. BS: He came on as a line chef over seven years ago. He had gone to school in Italy and came back to the United States to work for us. He was with us for six years as a sous chef at Frasca doing Friulian cuisine and then we moved him to back to Italy. He was in Naples for just over six months, working on that oven.

Why is your oven special? BS: That oven is the first of its kind in Colorado and it's called a Stefano Ferrara. We were going to have them build the oven in the space. If you roll back to summer 2010, Bruiser was living in Italy and we were starting construction. We were going to have the Ferrara family roll over here in their white beaters and Levi shorts and build it . They shipped everything they needed to build the oven in a container. LMP: All the mise en place to make the oven, clay and dirt included. BS:So basically everything to build and oven, but not an oven. They were going to fly over. They put everything on a boat, where it spent six weeks floating across the ocean, and then it hit Houston and some guy with a big cowboy hat at Houston customs looks at it and says, "Well this isn't an oven, this is a bunch of dirt." And he quarantined it for five weeks. It was a mess. LMP: We got an attorney involved and we ended up getting a congressman involved, who contacted someone in in Washington, who then contacted someone at the port of Houston. We had to sign all these affidavits so the attorneys could be on the phone at the same time that customs would run. After a couple weeks we figured out that there were three bags of soil [for the oven], which are "nonconforming goods," that can only be shipped to labs for medical research directly overseas. There was a small amount of dirt that they [the Ferrara family] were going to mix with cement to hold everything together. We convinced the guys to send the oven without the dirt, thinking we could just use Boulder dirt. Only a small amount of the 12,000 lbs was actually dirt. There was tons of sand, which they [customs] were ok with, just not the dirt. It was crazy. So we kept holding out and then they said they had to send it off again and sanitize everything because Italy has foot and mouth. We were like, "You can't be serious." Everytime you move stuff like that around you risk cracking floor slab, breaking the bricks, etc. All of that took five weeks and we didn't have anything.

So what did you do? LMP: They stopped building an oven over in Moscow and sent it to Boulder. Fourty-five days later that oven arrived.

And the other oven? LMP: It's sitting in a landfill somewhere in Houston. A bunch of awesome handmade bricks. So sad. Someone should be dumpster-diving in Houston.

What other challenges have you encountered? BS: There were economic challenges because of the delays, so we had seek more capital and take partners on, which we had never done.
LMP: We realized we didn't have 30 years of pizza-stretching experience. That was a big challenge. CD: The free pizza day when we opened. We tried to invite some local people to come in and try the pizza, but word got out that we were offering free pizza. So on our first day of business, which has a lot of trials and tribulations anyway, we had a line out the door in the dead of winter. We were hoping to lightly introduce things, but it was just chaos.

What changed? BS: I think it's more of a restaurant than we ever imagined it to be. It's a serious restaurant. Because it's part of Frasca and has access to the Frasca wine list, it's different than most pizzerias. LMP: It's super Italian to have the ability to drink lots of great wine in an incredibly casual atmosphere.

So you mentioned that introducing your style of pizza was a bit intimidating. How did Boulder react to it? BS: Some people loved it. Anyone who's Italian, totally gets it. But, like any food produce, especially pizza, you see backlash. Even though we are in a very sophisticated food community, it was new to a lot of people.

What kind of criticism? LMP: Let me act it out for you because we deal with this everyday: "Well... You know, it's kind of wet? Yea, it's wet. It's not crispy... What's going on here?" CD: And then I say, "So it's just a little wet and it kind of falls over? But it's really flavorful?" LMP: "Yea..." CD: "It sounds like we're killin' it then." We've won a lot of people over, but it's an education process. BS: If you're a guy from Houston and you're into BBQ and you go to North Carolina, you're pissed off. It's not your style. We understand that of BBQ in the United States, but pizza? No way. We can articulate that for BBQ, some forms of Mexican food and a lot of Americana things, but with pizza it's all about our memories.

What pizza places do you like to visit in other cities? All: Pauly Gee's in Brooklyn and Anthony Mangieri in San Francisco.

Looking back, would you do anything differently? BS: Take to-go orders, from the very beginning. That's it. This is all still very exciting for us.