Share All sharing options for: Russell's Smokehouse Team Dishes on Victories and Challenges Faced Since Opening 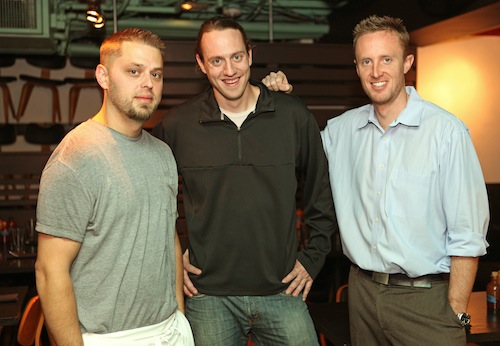 A year ago, in a basement space next to the young and hip Green Russell speakeasy, Russell's Smokehouse opened its doors. Frank Bonanno, who owns Russell's Smokehouse and several other eateries in Denver, had a vision: creating a casual restaurant that honored the spirit of the West and the cowboy tradition of cooking over a slow, low flame. That vision was executed and carried through for the last twelve months by general manager Andrew Mangan, chef Taylor Drew, and beverage director Adam Hodak. The three sat with Eater to talk about the process of opening this unique concept and the struggles and accomplishments that the last year brought on.

What was the planning process behind Russell's Smokehouse? AM: It was a little intense. When these guys open a new concept, Frank is definitely the one driving the ideas but it is up to us to implement them and figure out how to make them work efficiently, how to make sense of it logistically and in a cost effective way. We get to figure out a way to make Frank's vision come to fruition.

Speaking of implementing the vision, what was the easiest thing to implement at Russell's Smokehouse? AM: the most straightforward piece was the service piece. All of the restaurants we have have a vision, a plan. We can take what we do at Osteria Marco and do it here. It is really about training the staff and making sure we uphold the level of service that is expected in Frank's restaurants. Service was definitely the easiest piece- this is what we do in the Bonanno restaurants - the model is always the same, the framework is there.

What was the biggest challenge as far as implementation? AM: The biggest challenge was definitely the physical space. This space was not pretty when we took it over. Before us there was a bar in here called Below, a place that had a back alley. TD: For the kitchen, the challenge was fine-tuning the smoking of the meat, figuring out the best way to do it, how long it takes, what sides go with the meat. From the time we opened and until now, our challenge has been finding a way to have fresh smoked meats every single day. We take ribs out of the smoker in the morning and serve them that day. We don't hold stuff overnight here. There is that balance of trying to keep our cost down while maintaining a very fresh product.

What is your most lasting memory surrounding opening day? AM: We had to push back the opening a few times to finish construction, get the permits, move the grease trap and so on. The hardest thing for us was that we hired amazing staff and when we had to push the opening back a whole month, we just didn't have work for them. We hired, we did three or four weeks of detailed training from wine, beer, and liquor to food and service training. Then we had to push it back the opening. On the bright side, we managed to keep all of these people on our staff. We found them temp spots at some of the other restaurants for that month and everyone was on board on opening day.
TD: by the time we opened, particularly because we were delayed a whole month, we were ready to go. Opening night was not all that stressful but down the road a few weeks, we started learning some lessons. Some of my cooks when we started came straight out of culinary school - they had some lessons to learn in the kitchen and that took a little bit of time.

How did you create the menu? TD: Frank and I put together the menu. Sean Kelly, who consulted on the concept, had some input in it. We all took a part of it, made some things, liked some and didn't like others. It was a process. AM: Frank had done a lot of research before. He really knew where he wanted to go with it down to specifics. For example, our sauces, he knew he wanted three kinds of sauce - a spicy one, a vinegar-based one, and a sweet one. And, of course, the big emphasis on being a smokehouse and not barbecue joint.

How has the menu changed in the last year? TD: When we started, sides-wise we only offered beans and coleslaw. A couple of months ago we changed that - we did more composed plates. Every plate has a different starch and different vegetable component. We upped the ante on our fish dishes as well. At first, we only had a salmon dish on the menu. Now there is a nice prawn dish and our salmon dish is more composed.

Why did you make those changes? AM: Frank definitely has a Denver following, a regular clientele. They expected more than just black beans and coleslaw. We moved to composed dishes - our brisket, for example, is paired with sour cream mashed potatoes and grilled asparagus. But we are very flexible on substituting the sides.

What about the bar program? AM: We tried to have a well-balanced bar program. The beers we have- they are 100% Colorado beers. We like to work with the Colorado producers. AH: We have a good amount of whiskeys. I would not call us a whiskey bar but there are quite a few whiskeys here. As far as the cocktails, they are meant to be approachable and complementary to the food. We have a smoke and oak cocktail that pairs well with the dishes here, echoing the smoke in the meats. Most of the cocktails we have are based on a higher acid content to balance the richness of the meats.

What has the biggest misconception been about Russell's Smokehouse? AH: People think we are a barbecue restaurant and we are not. That and that brisket isn't fatty. People would come in and complain about brisket being fatty - traditional brisket has fat on it- it gives flavor.

What was the biggest accomplishment over the last year? AM: The development of the staff for sure. The staff was young but I think they enjoy being here and growing with the restaurant. It is like a tight-knit family. TD: that echoes in the back of the house. It has been great to see them grow with us particularly since we had very little turnover. AH: working with these two guys for sure. They are the people who make it all happen. It has been incredible to see them evolve here. This place is the smoothest-running restaurant I have ever been in and that is because of them.