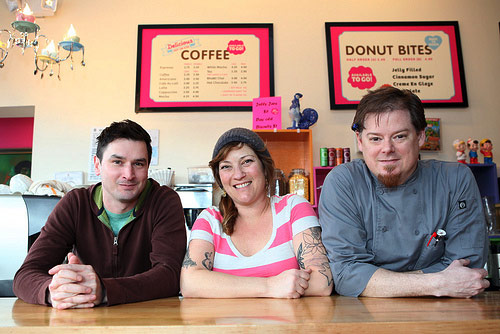 When Josh Epps and Christina Smith met on a Southwest flight in San Francisco years ago, neither of them could have predicted getting married, moving to Denver and opening a breakfast place. Epps was a successful jeweler and Smith was a massage therapist. With with a variety of restaurant experiences and a shared affinity for breakfast, their lives changed when they left San Francisco. Now, after seven years in Denver, career changes and three kids, Epps and Smith are celebrating the first birthday for their fourth child of sorts — Jelly Cafe. The hipster hangout in Cap Hill has become a thriving pulse on 13th Ave. and snagging a table during weekend brunch is a tough feat. Here's the story of how Jelly was born and how the charming decor of retro cereal boxes and teacup chandeliers came together.

You're both pretty fond of breakfast. JE: Definitely. Once we had a child it was the only meal we could really treat ourselves to.

What made you want to open your own place? JE: Christina and I both had a lot of restaurant experience and we saw a gaping hole in Denver for a cool, neighborhood breakfast place. CS: There were a couple places, but there was definitely room for more. JE: The idea kind of started with potatoes actually. CS: Yes, I had forgotten about that. Our potato quest —we could not find good potatoes. When you go out to breakfast you usually find those little tiny fried ones or chunky russets with undercooked vegetables. We only serve red potatoes. There's not a russet in the house.

Why Cap Hill? How did you find the space for Jelly? CS: We found Cap Hill because of WaterCourse. That was kind of our go-to place when we moved here. JE: We were looking in the Highlands, but we decided that wasn't really what we wanted. We wanted something urban and modern, and we didn't want a bunch of screaming kids. CS: (laughs) Yea, we have our own screaming kids. JE: We were looking around this area and we literally turned around and there was a beam of light shining on it. CS: A beam of light shining on a dump. It was a dry cleaner for 60 years. We walked in and there were holes everywhere, but it was a diamond in the rough. We were going to do anything for this space because it just felt right.

Tell us how you converted a dry cleaner into a restaurant. How did you design Jelly?
JE: We designed and built everything ourselves. CS: It needed a lot of TLC . We put in three bathrooms, a commercial kitchen and new floors. JE: We were discussing how we were going to decorate and the thought of having a local artist bring in their crap every other week — it just wasn't a fit for us. CS: A cereal box kind of started it all off. CS: Yea, I've had the C3P0 cereal box since I was younger. I've always carried it around to show people. It's awesome. We got the rest of the boxes off of ebay. CS: He was all about the cereal boxes and I was all about the chandeliers. We had the orange and pink color scheme and it just took off from there.

How did you decided on the name Jelly? JE: Snooze, Toast, Syrup — they're all one-word names. CS: Jelly just stuck and you can't say it without smiling. JE: We had already designed some of the menu and we knew we wanted to make homemade preserves. CS: It's comfort food with a twist. It's all fresh and we make everything to order. The name Jelly takes you back to things like peanut butter and jelly when you were a kid. For me, the name Jelly takes me back to my grandma, who made fresh jelly. It's what you'd get for Christmas.

What's been the biggest challenge? JE: The biggest challenge has been the building itself. It looks good, but it's an old building. CS: When you have an 85-year-old building every single thing needs work. JE: We also built it on a budget, so everything was either made by us or purchased from an auction. We spent bare the minimum to open. This first year has definitely been taxing.

What's been surprising during your first year of business? CS: The reception, for sure. It was busy from day one. We've had waits since the first weekend.

What the longest wait you've had? CS: An hour and a half. At the beginning I'd pass out fruit roll-ups because you could just see the blood sugar dropping. So we started selling doughnuts and biscuits at the bar. People can grab a drink or head next door to Beauty Bar while they wait. It's a really big deal that we make people feel comfortable. It's the morning and we're one of the first encounters of the day.

Tell us about your chef. JE: We got so lucky when we found David Payne. He kind of cut his teeth at one of our favorite spots in Berkeley. CS: Rick & Ann's! JE: When he mentioned Rick & Ann's, we kind of knew he was the man. CS: He's been with us from the beginning. It's almost like we're a tricycle in a way. We help each other out.

Did other restaurant owners give you any advice? CS: Years ago Justin Cucci [Linger and Root Down] said, "Don't do a build-out. Get a restaurant that's already established."

And you didn't listen, which is funny considering he flipped an auto body shop and a mortuary into restaurants. JE: No, we didn't listen. But if anybody asks me for advice, I'm going to tell them the same thing. CS: I would say the same thing. If you can, try to find a place that has a kitchen.

Is that maybe your one regret? Not finding a place that already had a kitchen? JE: It's hard to say you regret something. I mean, your baby shits and cries, but it's still your baby.

So will there be another Jelly in the future? JE: I can see us doing one more, but we want to keep the mom and pop vibe. I wouldn't want to lose that personal touch.