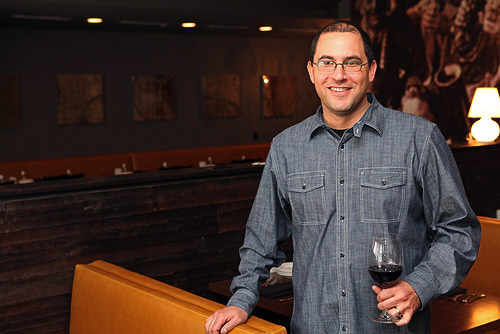 When Row 14 owner David Schneider moved to Denver four years ago, he thought he was getting ready to open a restaurant with Next Iron Chef winner Michael Symon, a good friend and industry buddy from Cleveland. With plans to open in the SugarCube building (now home to ChoLon), the project was shaping up to be a solid concept. Schneider says he was ready to pour his heart and soul into the place, but the deal fell through at the very last minute. Schneider waited tables and worked as a restaurant consultant while he searched for his next opportunity. When he looked at 891 14th Street, a space located in the Spire, he saw a lot of potential. Today, Schneider, chef Jensen Cummings and the staff at Row 14 are celebrating their first birthday, and starting at 10 PM tonight, the restaurant will host a big celebration, inviting all industry friends to stop in for complimentary late-night snacks (did we mentioned Fernet on tap?). Schneider sat down with Eater and told us that though he's encountered his fair share of obstacles, he's proud of where Row 14 is today. He's also ready for his next project.

How did you feel when the SugarCube deal fell through? Like I was going to throw-up. It was hard. I didn't know what to do. I was out here and I thought I was going to have money in the bank. I thought I was able to start my life here, but I got totally hosed. It was a lot of work down the drain. I scrambled for some jobs, just to get some money coming in. I started waiting tables at Rioja and got another job with a restaurant consulting company. All the while I was looking for the location to do Row 14. I wasn't going to give up.

How did you find the building for Row 14? It was June 2010 and my babies had just been born. The Spire heard that I was looking and they called me to look at the space. I had no idea this place even existed. At that time, 14th Street was a war zone with all of the construction, but I came over here and definitely saw potential. I just knew that once we got through construction, this street had a lot of potential. It took us a few months, but we worked out a deal, and the rest is history.

Tell us about opening Row 14. When you're coming down to that last week before opening, everything is crazy. You have your staff hired and everyone is anxious. You want to host your friends and family dinners, but everything is waiting on the city. It was a Friday, and the city closes at 4 PM, and at 3:50 PM we got our final sign-off on all of the permits. I sprinted to City Hall and almost got hit by a train. We had all the liquor reps just hovering with booze, waiting for a liquor license number. And once we had it, that was it.

After three years of searching, what was opening day like? Opening day was pretty amazing. It was very gratifying, but this was a hard opening.

You're now on your second chef. Tell us about the transition. It got to the point where I really couldn't take it anymore with my first chef. I tried, but it was just one thing after another. Literally, the day I let him go, I got a couple calls informing me that Jensen was looking for a job. Working with Jensen is great. He's a really talented kid — hardworking, passionate and thoughtful. He worked with Troy Guard for a long time, and Kevin Taylor before that. He's got to find his own way, and I'm glad that I'm giving him the place to do that.

Are you at all involved in his plans to open a meatball shop? No, and he told me that was something he was going to do when I hired him, but that it wouldn't affect his work here. If anything, I think it will make him work harder. That's the drive that he has — he refuses to let anyone else work more than him. That's just his leadership style.

Between your unique wine program and Jensen's playful menu, how would you describe the style of Row 14? One of the things that we've been trying to establish is more of an identity. We have three words that we try to incorporate into everything that we do: thoughtful, playful and approachable. When people ask what kind of food we serve, I say that we're an American bistro, which kind of means we can do whatever we want. We do a lot of Old World meets New World. We don't want to use the word "fusion," but we take traditional ingredients and techniques from one culture and blend it with another one. We like to introduce people to new things, but at the same time, we're not trying to reinvent the wheel. There's always a little bit of comfort with every little bit of edge. We also have the safe bets for people though.

Looking forward, what are your hopes for this restaurant? I've always wanted this restaurant to be a great cornerstone, neighborhood restaurant. My landlord said construction would be done by the time I opened, so I opened in March last year, but it didn't go away until Thanksgiving. I'm looking forward to having a patio that doesn't have a tractor parked in front of it. I feel like we're really starting to come into our own here. We didn't have a great review from 5280, and we reflected on it. We looked to see when they were here, and everything they talked about was from Jensen's first menu. The restaurant has come such a long way in the last six months.

What's the future look like? I'd love to do another place. I needed to get through this first year though. People have been trying to talk to me about it for six months, but the first year is so hard. Between construction and losing my first chef, starting out was just hard. The last six months have been a complete 180 though.