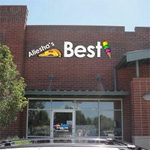 Police believe that "The 32 Bandit" has struck again, and this time at a pizza shop in Aurora. The man robbed Aliesha's Best Pizza (700 S. Buckley Rd) last Thursday night, threatening employees at gunpoint. Surveillance footage from several establishments has linked the man to 11 restaurant and gas station thefts in Aurora, Parker and Denver. He's called the "The 32 Bandit" because of #32 sports jersey he wore during one of the robberies. [9 News via DP]