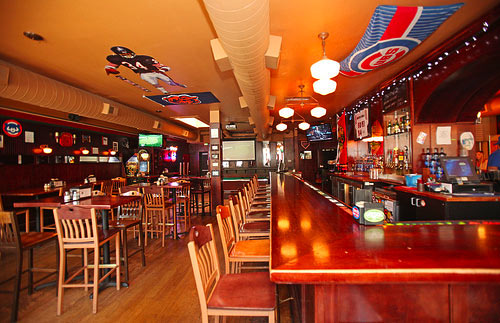 Just as much as I detest people who “know” Denver after visiting for a weekend, I would never claim to “know” Chicago. My stay in Chicago was a limited one. In my extended weekend, I gawked at the height of Sears Tower, ran along Lakeshore Drive, peered into my self-image at the mirrored Bean in Millennium Park, and marveled at the architectural prowess built along the river — you know, the obligatory visiting spots for visitors. But when the sun set, I turned toward the watering holes. Find where the locals drink and you’ll bring back the best stories.

I don’t remember the pub’s name. After all, this was several years back, alcohol was involved, and it was somewhere along Lake (or was it Randolph?). Regardless, I loved Chicago after visiting. I’ll never claim to know Chicago if/until I live there, but I know where to find the ex-patriots and their drinking ways in Denver.

Wyman’s No. 5, nestled in the Cheesman Park locale, is a Chicago bar first and a neighborhood bar second. If you’re a Chicago-native-Denver-transplant, there a few truths about Wyman’s and you. Truth one: you’ve been to Wyman’s to cheer on your Chicago team, be it Cubs, Blackhawks, or Bears; truth two: you’ve heard of Wyman’s because it’s a Chicago bar; truth three: if none of the aforementioned items apply to you, you’re lying —you’re either not from Chicago or you’ve heard of them. Like it or not, there’s a tailgating party held before Wyman’s doors open on the day of a scheduled Chicago game.

Situated on the popular corner of Liks, Wyman’s easily falls flush into the white brick wall facade. Green-painted shutters are the only components to a patio that Wyman’s may have. The front door is inconspicuous and easy to walk past, if it wasn’t for its patrons lining the wall, grabbing a smoke. In crossing the threshold the place is split into two seating areas with the bar smack-dab in the middle. Secluded booths line the walls, group seating in the middle, and usually a few empty seats at the bar. But Wyman's is never empty. I saddled up to the bar and leaned on my forearms to join my fellow anonymous barfriends.

Three overhanging flags tote the signage of Cubs, Blackhawks and Bears. All the TVs peering down from the corners broadcast some type of sports. If there’s any Chicago game on, it’s showing. Some patrons are there to see the game, others are there to hang out, and some are just there to drink. I’m left alone by my barman. There’s rarely any chatter between the bartenders, unless he or she is a close friend. Efficient, orderly and minding their own business is the lot of these bartenders.

The standard domestic beers are present, and Great Divide Brewing is always on tap, as is New Belgium. Old Style is cherished among Chicagoans, much like hipsters love their PBR, and it’s drawn from the tap. I ordered a Great Divide Titan IPA with a sidecar of Fernet Branca, and sat back to enjoy the scenery. A man sitting a few seats down from me gently chugged his beer after every other breath. But not all were nose-down in their beers — several lone rangers glanced at the TV screens instead of staring blankly into their mirrored reflections behind the bar. A couple cuddled in the intimate booth tucked behind the door, oblivious to the fact that it was neither dark out, or that they were in public.

Try not to read too much into the numeric value attached to Wyman’s. It was Little Pub Company’s fifth bar to open, and the name stuck. Its namesake “Wyman” is based off the surrounding historic district in Denver. Pretty straightforward. Knock it as you may, Little Pub Company achieves what it aims — a pub where locals join to drink. At night, though, the place becomes a last-stop bar, for those looking to get the last licks from their pint or potential partner. An old local winks at me; I catch his drift.

I settled up with naught a goodbye. The bartenders know at some point in the future, I’ll be back. We always return at some time or another.