The First Year of Brick and Mortar Business at Biker Jim's

If you buy something from an Eater link, Vox Media may earn a commission. See our ethics policy.

Share All sharing options for: The First Year of Brick and Mortar Business at Biker Jim's 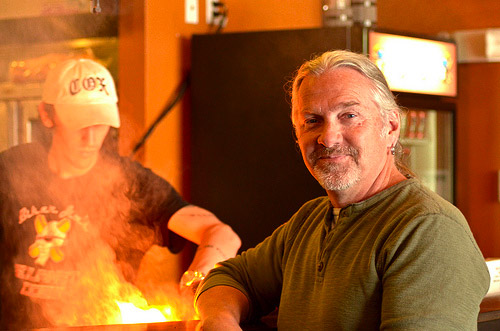 For anyone even slightly familiar with Denver's mobile food scene, Biker Jim's Gourmet Dogs most likely resonates on some level, even if it's but a drunken memory. The humble food cart that evolved into a business with a truck and a brick and mortar location didn't exactly happen over night, but Biker Jim's has quickly become one of the most popular dining destinations in the city. Owner Jim Pittenger's exotic hot dogs and sausages (reindeer, elk, wild boar, rattlesnake, alligator) have featured on Anthony Boundain's No Reservations, Ludo Bites America and Unique Eats. And crazy enough, Biker Jim's is also Denver's highest rated restaurant on Yelp. It's been just over a year since Pittenger opened the brick and mortar location in the constantly evolving Ballpark neighborhood, and it's been a fine year indeed. Here now, Pittenger tells Eater about the first year of brick and mortar business and what's next.

What challenges have you encountered during the first year of business at the brick and mortar? Our biggest challenge has been that I just didn't have a clue what I was doing. This whole situation has been a leap of faith. I knew I was doing the right thing, but I wasn't really sure what I was doing. Being a one or two man show, where your overhead is a couple hundred bucks a month for the spot — and I was paying upwards of $1,000 a month for my commissary kitchen — it's not hard to deal with. But, when you jump into a $5,000 space, and you have 20 people replying on you to keep the doors open, it's different.

What have been the biggest rewards of opening a brick and mortar? I've been to schools and talked about overcoming drug addiction, and I've fed a lot of people, but this is the first time I've done something where I've helped others support themselves. I think that's pretty cool. Hopefully I'm able to do that more. Also, I was a really good repo man once upon a time, but I didn't make many friends. It's not a social gig. The upshot is that I'm a fairly social guy, and I've really enjoy getting out and shooting the shit with people. I'm a pretty firm believer that things happen as they should, and really, timing couldn't have been any better.

Tell us more about life as a repo man. Back then, I spent a lot of time driving around in a truck. I drove like 1,500 miles a week, and I probably repossessed 12,000 cars during my career. I had no issue repossessing cars. Truthfully, I looked at it as a way of helping people. If you know your car is going to get repoed, that's definitely the monster under your bed. But once it's done, you get to move on. I didn't have a bad job, and I wasn't a bad guy, but I was still there to take a car. By the end of our interaction, I'd be towing their car away and they'd be thanking me. There were, however, occasions that I had guns pointed at me, and it's amazing how big my balls got. Fifteen minutes later my heart was in my throat, but at the time, it was a rush.

You're definitely prepared to deal with difficult customers after that line of work. You know, a difficult customer is just someone who has a challenge. If they're drunk and out of their minds, there's very little dealing with them. But, if someone has an issue with the way their food is prepared, or they don't like the way something tastes, it probably has so little to do with us, and more to do with the guy who cut them off in traffic or something. But we're always going to hear someone out. And in terms of social media, I respond to most Yelp reviews that are three stars and under.

Do you respect Yelp reviews? Yea. We get so much business from Yelp. It's helped us become a destination. If we get a one or two star reviews, and we've had few, I'll respond and see what happened. I'm not saying shit doesn't slip through the cracks, but we try to avoid that.

Selling gourmet hot dogs isn't all that much of a unique concept. What makes Biker Jim's successful? I think it comes down to our customer service. The way I see it, our customers are part of a our crew. I don't treat my customers any different than I treat my crew and managers. I realize that everyone is here to help each other. We're here to feed customers interesting, fun, fairly nutritious hot dogs; Customers are here to make sure we can do that for them. We're all a team. I realize we present challenges for some guests. For some, walking into Biker Jim's is their first introduction to hots dogs made out of things like elk and rattlesnake. Our mission is to help introduce some of these more exotic sausages in the right way, and help guests understand that these unusual items aren't "bad" — they're actually really good, and they're all hormone and antibiotic-free. I think our crew is really good at that.

So what's next for this brick and mortar location? Any changes? We're kicking around the idea of doing breakfast. I'm not a chef, but I can cook some stuff. I think we'd kill it at breakfast. I make the best sour cream waffles.

So you'd introduce things outside of Jim's dogs? Fuck yes. Sour cream waffles with milk-fried chicken, buckwheat pancakes and maple syrup, reindeer breakfast burritos and sausage (of course). We're going to get our catering tuned in first though.

So what about the future of Biker Jim's as a whole? What next? The future is what the future's gonna be. I know what I want to happen, but whether or not that plan falls into place, remains to be seen. Right now, we're going to start snooping around Denver and looking for another location. The food truck scene is still happening, and I have a meeting in coming weeks with the guys from Mobi Munch. We'll continue looking at launching Biker Jim's concepts in trucks around the country. And there's a specific market we're looking at, but I'm not of liberty to tell you what market we're really trying to nail. Once it happens, cool. It will be phenomenal if it happens.

So Biker Jim's will go corporate? Yea, I want to be able to have a corporate responsibility with a rebel attitude.

Describe that. You know, I'm on a conquest. I'm the owner that will tell you a dick joke. I really want to be part of a national presence, but I would be way more Ben & Jerry's than Donald Trump. I want to be able to ride in on my motorcycle and not feel like I have to dress to impress anybody. I treat junkies and mayors pretty much the same. That's my attitude.