Armida's, Where Daiquiris and Regulars Take The Stage

Share All sharing options for: Armida's, Where Daiquiris and Regulars Take The Stage 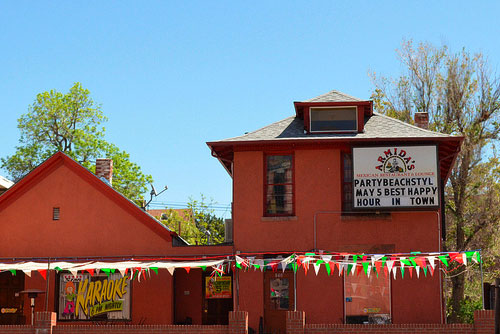 At 11 p.m., Lincoln Street was deserted. Typical, I suppose, for a Tuesday night. Newspapers were shuffled across the asphalt, an ambulance siren sounded in the distance and cherished parking spots stood open and free of charge. We parked by Armida’s Mexican Restaurant & Lounge, giddy to try this karaoke legend. Just thirty minutes before, we had gorged on not one, but two beautiful Korean Barbecue dinners at different venues. Why not wash down our ethnic eats with something blended and sickly sweet at the quirky, fabled Armida’s?

The singular path of peach-colored concrete steps escorted us to the doorway of this Denver mainstay. Red, green and white flags hung across the entrance and a poster bragged, "Best Food, Drinks, and Karaoke” in block letters. Good thing, since we landed at Armida’s for the sole intention of singing our hearts out.

We entered through the enclave, peering at the tube lights accentuating choice liquor selections. Red chili lights smeared the ceiling in inconsistent patterns and directions, and “Picture” by Kid Rock and Sheryl Crow sounded in the background. This will be a show, I thought, as we perched against the wall.

Our server arrived at our table with a smile.  She was an adorable 19-year-old-ish doll with The Limited black-framed glasses, belonging on library night-shift instead of taking drink orders. I was with close industry friends — the type of folks that know a margarita as tequila, fresh lime juice and triple sec. Their faces shriveled at the mention of blended margarita mix. Unoffended, she rattled off Modelo, well specials and daiquiris. I ordered four daiquiris before the mixology friends could inquire and dismiss. Our server skipped away, invisible pigtails bouncing to and fro. Janis Joplin’s reincarnate serenaded us with “Me and Bobby McGee” as we slurped down our blended strawberry daiquiris and licked the sugar rim.

Whether owners Fausto and Armida Corral envisioned Armida’s as a place crowned “Best Karaoke Bar” and “Best Chile” (be it red or green), it’s earned the reputation and praise from multiple publications. Regardless, this duo from Guamuchil, Sinaloa (near Mazatlan) have created a hospitable atmosphere. The crowd is welcoming of any jukebox hero or newbie crooners. After all, Creed, Jason Aldean and Tina Turner all came to play.

If karaoke isn’t your thing, either join for happy hour before the DJ sets up, or head upstairs for the pool table. Otherwise, order a few mixed drinks and tequila shots, and enjoy the show. That’s exactly what we did. Some singers may impress you with their pipes and you’ll find yourself swaying, either to the beat or the booze. A hip 20-something-year-old in a glittery graphic t-shirt, fashionably-cut jeans and an edgy haircut sang a stirring rendition of Sugarland’s “Stay.” A few lighters-via-iPhone were lit, claps sounded and laughs were exchanged.  For everyone, it was a revisit to the oldie-but-goodie songs long forgotten.

Armida’s legend, a 70s-ish-year-old man who sings karaoke every night continued his streak. Monochromatically dressed in a polo shirt and shorts, this white-haired, leathered-skin, droopy-eyed rockstar took the stage. As he lit into the first stanza of Prince’s “Purple Rain,” the room clamored in support.  And when he reached the chorus of his soulful rendition, we were singing along with invisible microphones, howling into our fists.

I’ll be back, but not to sing an off-key Bonnie Raitt rendition or to guzzle down a daiquiri. Instead, I’ll be back to see the regulars, and I’ll certainly be on the look-out for the old man. I have my fingers crossed his next ditty will be Earth, Wind & Fire’s “September.”

With our last song, we paid our tab and exited back to deserted Lincoln Street.  And as a group, we all walked to the car, mumbling the off-key lyrics of Hall & Oates’ “Rich Girl,” ‘cause you know it don’t matter anyway.