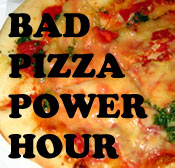 Grace W. on Mary Jane's: "The delivery guy said his car was hit on federal and that is why it took so long. I understand, but don't you think they could have called us or had someone from the shop give us a heads up?? I called around 11:30 got the pizza around 1am. Accidents happen that is completely forgivable, but terrible pizza is not. The pizza was completely cold and the crust was just a frozen crust that had fresh toppings added to it. You don't even have to taste this cardboard saltine-like crust know it is not fresh. Simply look at the bottom and you can see the pre-molded marking of packaged dough. Yuck! Shame on you Mary Jane."

Feel like venting about a bad pizza experience? Please, be our guest. Leave your complaints in the comments, or drop us a note.

Celeste D. on Marco's Coal-Fired Pizza: "The pizza: atrocious. To be fair, YES it was the gluten free version, but omg what a botch job. The dough was flavorless and RUBBERY. Rubbery like, I had to chew it for five minutes so that I wouldn't choke on it. I DID choke it down too, because I paid a day's wages for the gluten-free option. The toppings were dry & gritty like they had been sitting under a heat lamp. At one point I had a crunchy bite of sausage. Are you hearing me people? CRUNCHY SAUSAGE. Wtf?!"

Liz M. on Benny Blanco's Slice of The Bronx: "The people that work there are EPIC a-holes. On one occasion I was actually there and the stoner behind the counter wouldn't sell me a whole pizza... not sure why. He would only sell my boyfriend and I two slices each, like they were margaritas from the Rio or something. I still don't understand what happened there, I honestly think they were about to close and he just didn't feel like making another pizza."

Bobby G. on Sexy Pizza: "The cheese tastes like some cheap crap that comes out of a bag, and lacks the gooey consistency that you want in a pizza and that is easy enough to come by at other spots in Denver. This crap cheese, btw, is the source of the grease that many on here have been complaining about. And the sauce- was there even any?- has no flavor, tastes like it was made with garlic powder and vegetable oil. This is saying a lot, A LOT, but this may be the worst pizza place I have tried in Denver. This place is sexy like Rex Ryan is sexy."

Erin T. on Beau Jo's:"I typically LOVE Beau Jo's, but the last time I was here we had horrible service and very greasy pizza. If I wanted pizza sitting in an inch of grease.... well, who orders that? The manager was non existent, and our server even had the gall to complain about our group to his other tables AND mess up our billing over and over again."

Josh S. on Denver Pizza Company:"I see an overall failure to please. Ranging from subtle hints from the staff that they knew what was going on with the cost vs. portion issue, the inaccuracy of the order, to the most obvious disappointment in serving portion for the $23 I paid - I won't be going back to Denver Pizza anytime soon. I liken DP's product to their interpretation of sushi: small portions, good taste, and REALLY EXPENSIVE. Papa John's gets my next order..."