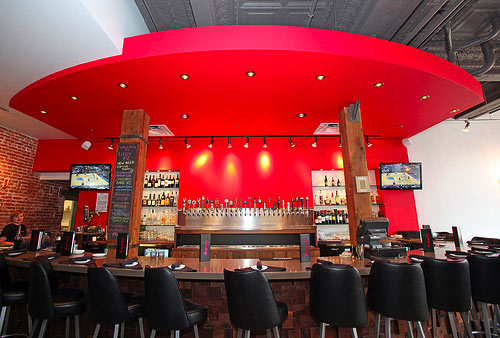 Rocky Balboa and Adrian Pennino. Bert and Ernie. Dr. Spock and Captain Kirk. Darryl Hall and John Oates. Much like the famous duos we know, pizza and beer rank among them. As Eater celebrates Pizza Week, it’s only natural for Denver to pay homage to its sidekick: beer. Not sure what to drink with more unique pizza flavors like kimchi and anchovies? There’s a beer for that. Consider the flavor profile of a beer. Is it sweet? Bitter? Spicy? Rich? Perhaps there's some carbonation. Or maybe it's really heavy. Sure, cheap beer works so well with shitty pizza, but what about beers and pizzas of the craftier variety? Here now, Eater’s guide for a variety of beer and pizza pairings, with some local craft beer suggestions included. Cheers!

Pilsner (Czech): When you’re looking at a pilsner, specifically a Czech pilsner, it’s characteristically a spicy hop with the addition of the Czech hop, Saaz. The maltiness and bits of caramel will give this beer the opportunity to pair perfectly with many foods, including 'za. Look for something clean, clean, clean. Go for an original cheese; add tomatoes and spinach as toppings if you absolutely must.
Suggested Colorado Beers: Odell Double Pilsner, Joe’s Pilsner by Avery or Mama’s Little Yella Pils by Oskar Blues.

Cider: A curve ball, we admit. The crisp, effervescent flavor, combined with an edge of sweet with work perfectly with pizza. It cleanses the palate while adding the perfect plus to your pie. Go for something simple or sweet — you’ll want to play off the sweet/tart flavor in the beer.
Suggested Colorado Beers/Ciders: Colorado Cider Company (Grasshoppa!), or if Denver Beer Co has their awesome cider on draught, be sure to grab a growler of that.

Belgian FarmhouseL Clean, crisp, dry and slightly fruit-forward — this beer works well with foods beyond pizza. Similarly to the Dubbel/Tripel pairing, the style works with the flavors in a white pizza. Give mushrooms a shot. The funky flavor of mushrooms may make some of the yeast work well, or it may bring out the crisp flavor. See what your tongue craves.
Suggested Colorado Beers: Great Divide’s Colette, Crooked Stave’s Surette or Funkwerks Saison.

Pale Ale: Pales are versatile ranging from golden to amber in color, and can sometimes have a bread, nut or caramel flavor. With pales, there's freedom to play with the pairing, and generally, the flavors will work.
Suggested Colorado Beers: Upslope’s Pale Ale, Odell’s St. Lupulin, Dale’s Pale Ale by Oskar Blues or Dry Dock’s Breakwater Pale Ale. For the slight Belgian kick, give Avery’s Karma a shot, too.

Sour & Wild-Fermented Ales: Whether its a lambic or a Flemish red, the wild yeast characteric in these beers can highlight atypical pizza flavors. If the beer is fruit-forward, play up the sweet and spiciness of a pizza. Curry, peppers and Italian sausages are complemented well by this beer style.
Suggested Colorado Beers: Avery’s Sour Series (Dihos Dactylion, Immitus, etc.), Odell’s Friek, Crooked Stave’s Wild Wild Brett Orange or New Belgium’s La Folie

Barley Wine: Beers with weight beers pair well with pizzas with weight. If you have a funky cheese in your pizza, a barley wine may be the perfect complement.
Suggested Colorado Beers: Avery’s Hog Heaven, Great Divide’s Hibernation, Left Hand’s Widdershins or Boulder Beer’s Killer Penguin.