Is Denver Ready For Molecular Doughnuts and Coffee?

Share All sharing options for: Is Denver Ready For Molecular Doughnuts and Coffee? 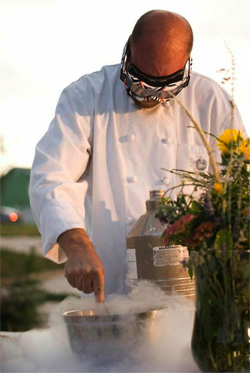 This city has its fair share of pop-ups, but this week's series of molecular gastronomy dinners from chef Ian Kleinman at Studio F represent more than fun with circulators and liquid nitrogen — Kleinman, who operates The Inventing Room catering company, is gaging whether Denver is ready for the brick and mortar concept he's planning. "I've been trying to take a pulse, and since we've had nothing but praise, it's given me confidence," Kleinman said, alluding to the various pop-up dinners and private functions he's been hosting across the country. So what bizarre concept is he thinking? Kleinman tells Eater that he's scheming on bringing Denver the first molecular doughnut and coffee shop. "I want to go bizerk with doughnuts and coffee. Ideally, we'd have a long counter, similar to an ice cream parlor, with 30 seats. We'd have doughnuts and coffee during the day, and at night we'd become The Inventing Room. Guests would walk in, have a seat at the counter, and one chef would be assigned to each party. It would be a very personal experience because one person would be doing everything — cooking, bartending and serving." And if you can imagine it, Kleinman also wants to introduce the city to a ridiculous coffee concoction — three pots of coffee condensed into a single shot or morsel. While Kleinman isn't sure when the concept will take flight, he's definitely ready to make some moves, especially since he's outgrowing his commissary kitchen. So, is Denver ready?