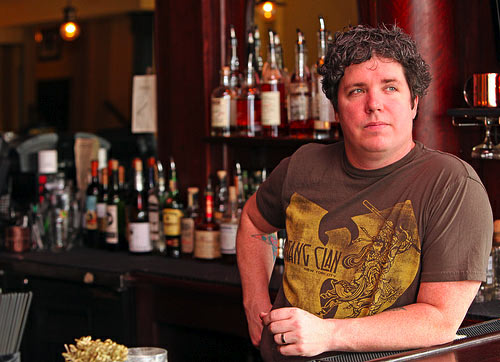 When Jimmy Callahan was ready to open his first bar, he saw potential in the old Roslyn Grill space, an East Colfax dive that shuttered at the beginning of 2011. Callahan sought to transform the tattered venue into a classed-up neighborhood spot with a quality bar menu and better-than-average bar food, and with the help of long-time buddy and chef Toby Prout, Callahan opened Prohibition in May 2011. Eater recently dropped in to chat with Callahan and Prout about their first year of business and what it was like to renovate a space littered with broken liquor bottles and crack pipes. Oh, and they also revealed that they're on the hunt for another project.

So how did you meet? JC: We met at Bennigan's in Boulder when we were 18 and 19 years old. He was a cook and I was a server. TP: We lived across Boulder Creek from each other. I grew up in Durango and moved to Boulder, where I went to CU for a couple of years. JC: And I basically just moved to Boulder from Dallas with a buddy of mine.

At what point did you enter discussions about opening your own place? TB: We lost touch with each other for a little while. I spent time in Miami, Hawaii and Arizona. He went to California for a bit. We both ended up back in Denver, and Jimmy started looking for places to open a bar. JC: It's been a work in progress since I was 16. There's little things you pick up here and there — you see things in other cities that you'd like to do with your own place.

How did you land this location? JC: When I moved to Denver, I basically just drove around looking for spots. I found this one on the internet. I came out here for hours one weekend and just watched people to get an idea of the demographic.

It's definitely an eclectic demographic. JC: Yea, it is. There's a lot of great people who live out here. TP: Once you scrape off the layer of Colfax, there's a lot of young professionals, college kids and industry people who live in this part of town. It's always interesting. We wanted to make an impact too by bringing in a place that wasn't a typical Colfax bar. I mean, we took the dirtiest bar on Colfax and made it one of the nicer ones.

What was that process like? JC: Dirty. TP: Hard. Cleaning the kitchen alone took over 65 hours. I had to use a blow torch. But there was good equipment here. You see those things, and you know there's still life in it. We had to change out a couple thermostats, but everything else worked. It just needed some TLC. Well, some hard TLC. JC: The front of the house was pretty bad. The floors were totally disgusting. The carpet was matted down on top of tile, and in some areas there were tiles on top of tiles. TP: We found our share of crack pipes and syringes as well. JC: There was also a hole in the middle of the bar that they had patched with duct tape and trash bags. That's how bad it was.

Tell us about the food you serve. TP: From the beginning, our mantra has been "an exceptional bar with great food." We wanted to serve bar food, but we didn't want to take it to the gastropub level — just great bar food. Our menu is small. It's about quality over quantity for us. I worked for The Ritz-Carlton, and I've worked in four diamond kitchens. I worked at Izakaya Den, NoRTH and other Fox Restaurant Group places, so I've definitely cooked at some higher-end restaurants. I wanted to bring this neighborhood good food, but at reasonable prices. Our highest menu item is $15, and that's a full meal.

Since the Roslyn Grill had a bit of a reputation, what have you noticed since opening Prohibition? TP: At first, we had to work hard to change the outlook. Some people have looked in and assumed that they can't afford to drink here, and the reality is, they can. We've really tried to keep this place reasonable. JC: But, a lot of the old "7 a.m. Roslyn crowd" was so drunk that when we renovated this building, they thought the only thing we had changed was the floors. Literally, I've heard that multiple times. TB: We don't tolerate the drug-dealing crowd though. We're really against being associated with that. At first, we had to make it pretty clear. We watched people like a hawk. JC: We learned who was who pretty quickly. You see everything out of that window.

So what's down the road for you? TP: We made it through our first year, so we're definitely happy where we are. Hopefully we'll jump on another place soon, and we'd like to stay close to this neighborhood. JC: This neighborhood is really transforming, and it's great to see more venues popping up. The more places, the better. TP: We're also thinking about potentially going more full-service here at Prohibition. We'll see.