Share All sharing options for: William's Tavern, An Uptown Oddball 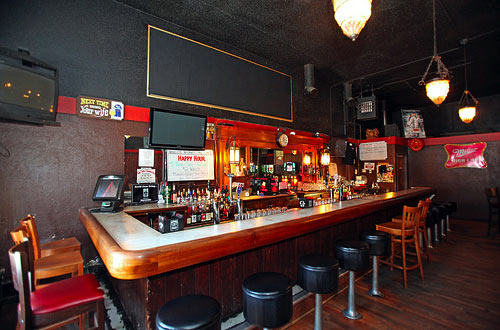 Pushing through the saloon doors and sitting at the barstool, William’s Tavern seems like the average, run-of-the-mill dive. All signs were present: the billiards table, a juke box, Big Buck Hunter, and odd smells of frozen pizza and sweat. But, at second glance, it’s a treasure trove of randomness. Gargoyles included.

I decided to visit William’s Tavern after a line cook at Steuben’s nominated it for The Barstool, in addition to a small request: “Please don’t make it popular. We like going there after shift.” Naturally, I was intrigued. I expected chefs sulking over beers, servers shooting pool, and bartenders hanging from the rafters. While I was greeted by three gargoyles, awkwardly placed near the ceiling, I found no industry folks in sight — just some old dudes shooting pool with a backdrop that mimicked a scene out of I Spy.

William’s Tavern, located in Uptown between Logan and Pennsylvania, boasts only a red awning with white block letters. There’s no hipster congregation at the front, and there certainly aren’t yuppie couples with baby strollers. It’s on a different spectrum, and that’s just fine. A dart board hangs in the corner behind the reputable Big Buck Hunter game, and a jukebox occupies the other half, playing the perfect tunes fit for Sybil and her seven personalities. The walls are bare, occasionally adorned with snarky vintage Pabst advertisements, like “Next time bring your wife!” and “Be nice or get out.” There’s even a list of phone charges if a patron’s wife calls. For a $1, the bar staff will answer with “not here,” and for $5 they’ll say “haven’t seen him today.”

I snuggled up at the heavy-set, dark-lacquered bar and examined the six taps. Busch Light, Blue Moon, Bass, Fat Tire, Long Hammer IPA, and Guinness. I opted for the Long Hammer IPA and a shot of Fernet Branca, and in turn, the bartender tilted her head with a bemused look on her face, shrugged her shoulders and moved to pour. “Never could stand the stuff,” she remarks over her shoulder about the ordered shot and then saunters to the next patron. I raised the glass in a private toast.

William’s began to grow on me. Maybe it was the frozen pizza smell nostalgically launching me back to my college days. Or maybe it was the piecemeal decor — a patchwork quilt, the saloon door, a clock running 36 minutes fast, and Trivial Pursuit cards placed on tables instead of sugar packets. I looked down at my cocktail napkin and saw it was ripped in half. All of them were. Perhaps it was a move to save money. Cocktail and wine glasses all stood erect and polished under a thin layer of dust. This is a shot and beer kind of place.

On that Friday night at 8 o’clock, I saw Williams Tavern as just that — a neighborhood tavern on Williams Street. It wasn’t three-deep at the bar, and the newbies and oldies had equal access to order their libations. Should I find myself getting kicked out of Steuben’s, in need of a something to help me digest whatever gastropub food bomb I may have eaten, I know William’s Tavern will have Fernet. I hope that assuages any doubt of it being overrun by the village idiots.