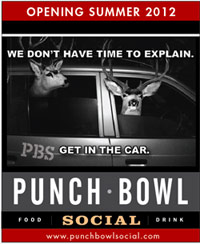 It's been a long ride since Robert Thompson announced the makings of Punch Bowl Social in September 2010. First it was slated to open August 2011, then December 2011... then March 2012... then June 2012... and now, Thompson says it's looking like a September 2012 opening — September 1st, to be exact, which is almost two years after the initial announcement. Thompson says he's well aware of the community's skepticism, but frankly, he just encountered some hurdles with financing, asbestos and a very complicated land purchase. "We lost three months messing around with a SBA [Small Business Administration], so we just decided to get back to work," Thompson explained, adding that construction will resume in the next two weeks.

Thompson, who recently recruited star bartender Anika Zappe as the beverage director for all of his projects, tells Eater that he's also promoted Le Grand Bistro & Oyster Bar chef Sergio Romero as the executive chef of all operations. "Sergio is a bold talent, and he's been with me a long time. He was ready for this opportunity, and I couldn't be happier about it," Thompson said, reassuring that Romero will continue to oversee the kitchen at Le Grand Bistro & Oyster Bar as part of his duties. The PBS team will open PBS Denver, PBS Portland and PBS Austin in coming months. PBS Portland will open in November at Pioneer Place mall, a space that trumps PBS Denver by about 7,000-square-feet. As for PBS Austin, Thompson says he's close to inking a deal in North Austin, which he'll likely announce later this summer.