Share All sharing options for: Steven Redzikowski on OAK at Fourteenth and Plans for a New Dry-Aging Facility

Steven Redzikowski, chef and co-owner at OAK at Fourteenth, stopped by the Eater Lounge at the Food & Wine Classic in Aspen to chat about the first six months of business at OAK and plans to install a dry-aging facility. 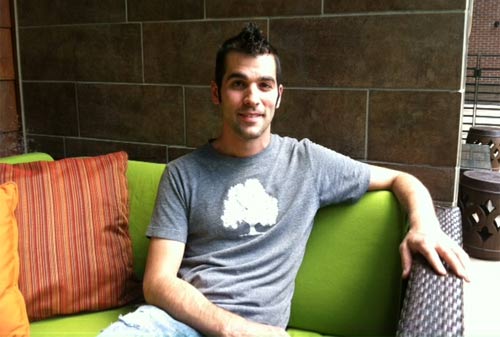 How do you describe your food these days? It's seasonal, American wood-fire cookery. Not everything on the menu is wood-fired, but a good majority of the menu is. We have an amazing wood-fire grill and oven. It's almost like cheating. The flavors that come off that equipment are just amazing. Unreal, really.

How have the last several months been going over at OAK? Pretty well. We've been booming. We were able to keep most of our team. I'd say 80 percent of our staff hung in there with us.

What have you noticed about Pearl Street since OAK reopened? The big thing with us is that dinner had been a big hit. Lunch is still kind of hit or miss. We've been trying to get our legs for lunch, but dinners have been great.

Talk about the transition of your menu from the old space to the new one. You know, we kept some staples, but really, I don't really think too much about the menus. We just see what's in season. Our big thing is that we just want to be a neighborhood restaurant. We want guests to come in two or three times a week, so we want to consistently change things so you can see something different on the menu.

You've had glowing reviews. Yea, they've been nice to us. It's all about our crew.

How often are you in the kitchen? For the first five months, I was there everyday. Now, with my crew — they're such great guys — I take Sundays off. They hold it down. They're great.

Talk about your crew. What's the energy like in your kitchen? They're warriors. They're absolute beasts. We're a no excuse kind of kitchen. I don't run it like a tyrant. I'm an easy going guy, but they know when it's time to really go. I can confidently say that none of our cooks regret coming into work. We make it a fun atmosphere. I haven't lost a cook in six months. If you have good crew, you can do anything. There's so much competition in Denver and Boulder that if you take one shift off and don't give 100 percent, how many people are going to notice that? You know? If you drop the ball one night — at least to me — it could ruin you forever.

How are you spending your time when you're not in the kitchen? I just got a new bike, so I ride that quite a bit. I got a Ducati — it's unbelievable. My kitchen crew jokes that my attitude has totally changed since I got that bike. I get to come out and do stuff like this [Food & Wine Classic], so that's not too bad either.

What are you plans moving forward? Well I'm excited to go through a full season. We haven't been through a full season yet. We haven't had a tomato on the menu ever at OAK. We had the fire in March [2011], and we opened in November [2010], so we've never had a summer menu. I was so excited to get fava beans and peas in because it was two years of opening with brussels sprouts and cabbage — really hearty things. I was so excited to open that first case of peas — green vegetables!

Considering you cook so seasonally, as there things you're disappointed to see on menus year-round? Honestly, I'm the easiest diner in the entire world. For me, to go out and eat is just so nice. People have asked how I judge other peoples' menus and I really don't. I like just sitting there. I mean, sure, I'll wonder why someone has celery root on the menu in the middle of August, but I don't really judge anyone. Everyone does their own thing. If you take nice and ingredients and let them speak for themselves by not messing them up, that's the most important thing.

Have you and Bryan Dayton talked about doing another concept? We have talked about that. I think it's really important to focus on out one baby first, which is OAK. We're so new, and we do throw ideas around about going to do some stages out in New York, Chicago and San Francisco, but that's far away. OAK, to me, hasn't yet hit what it's close to being able to do. It's potential is far greater, and I'll always think that.

In what elements? We change the menu quite often, and I want to source as best as we can. There's so much product we haven't even brought in yet and so many relationships with farmers we haven't made. Another goal of ours is that there's a nice big basement [at OAK] and we'd like to have a dry aging room down there so we can do dry-aged beef and make our own charcuterie and cheese. I plan on working a few days at Whole Foods because they do dry-aged beef. I'm not the biggest Whole Foods guru — I don't have anything against them — but they do things by the book. They're following every rule, so I want to learn from the guys that really do it well. There's no room for messing around. Bryan and I are by the book. I don't really know of any restaurants doing dry-aged beef, and we have the facilities, so why not? A dry-aged piece of meat on our grill would just be phenomenal.

When are you hoping to implement that program? I'd say in the next six months. I'm working with a couple butchers to set us up with the right cuts because we want to bring in whole primals. We'll bring in some big cuts — that's the way to do it.