Chef and restaurateur Richard Sandoval stopped by the Eater Lounge at the Food & Wine Classic in Aspen to share some details about his upcoming Denver projects. Sandoval currently operates Tamayo in Larimer Square, Zengo near Commons Park, La Sandia in Lone Tree and Stapleton, and Cima in Beaver Creek. 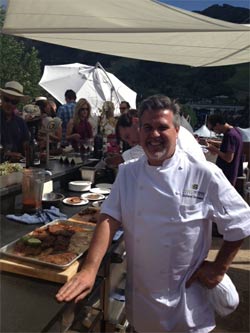 You've opened a lot of restaurants in Denver. What's the appeal? You know, I always liked Denver. When I was first invited to open a restaurant by Jeff Hermanson [Larimer Square owner], I was hesitant because I didn't know much. I had never been to Denver. Back then, the food scene in Denver wasn't the great. In fact, 10 years ago, I think it was one of the worst. There just wasn't that much going on. But today, it's completely turned around. There's great talent, great chefs, great farmers — farm-to-table. I think the culinary scene here has dramatically changed. People really embraced what I do and seem to like my restaurants, so I like being here. It's one of my favorite cities. When I left New York eight years ago, I was actually going to move to Denver because it was more central for me and I love the people and weather. Unfortunately, I ended up in California because my wife prefers the weather.

Tell us about Al Lado. It's connected to Zengo, correct? It's going to be connected in two places because we'll be using the same kitchen [Zengo's kitchen]. The spaces are back-to-back, so there they're connected in the kitchen, and inside the restaurant they'll also be connected. There's a wall with candles in the [Zengo] dining room right now, and that wall is coming down. It [Al Lado] will have its own entrance from the street, or you can enter through Zengo.

How many seats? About 70 seats. It's not small. We'll also have outdoor seating.

What phase is this project in? Right now we're looking to open towards the end of July, so very soon. It's full-steam under construction.

How are you describing this concept? Well, as far as the wine program, we'd like to keep it about 70 percent Latin, and the other 30 percent will be global. We'll also have wine on tap, and we'll have great sangrias — as many seven different kinds. As far as the food, it will be global. Obviously there will be a Latin influence, but we'll have dishes from everywhere. I like to play with different ingredients and cultures.

Is this a place you can come in for a full meal? It will more hors d'oeuvres and tapas, but today you can go get a full meal at a restaurant by just ordering small plates. We want to be a place people can come after work and have a nice glass of wine and a light bite or a full dinner.

Tell us about the Tamayo renovation. What phase are you in? We're going to relaunch towards the middle of September, hopefully by Mexican Independence Day, which is the 15th. We're doing a complete remodel. We are going to make the menu a little more approachable in some areas. The food will stay true to what we've been doing, but we're adding a taco category for example, and we're going to have an entire guacamole section — tuna tartare guacamole, pork belly guacamole, crab guacamole — you know, just more fun stuff like that. What's also really exciting is that we're building a tequila library, which is what I already have in New York. We'll have a collection of 400 tequilas. We're going to connect the private room we have upstairs [at Tamayo] to the outside terrace and build the library there. And we'll have lockers were guests can keep their own bottle of tequila. We'll also build a tequila library under Venga Venga in Snowmass.

Cima was the last restaurant you opened in Colorado. How's it coming along? Good. It's what I call Pan-Latin — it's a mix of all South-Central America. We're showcasing food from all of Latin America. Running a restaurant in the mountains is very different than anywhere else because they're very seasonal. You have to hire and then cut your staff by half, and turn around and rehire when the season comes.