Share All sharing options for: Samir Mohammad Dishes Why He Was Fired from The Village Cork Pre-Aspen Food & Wine Classic 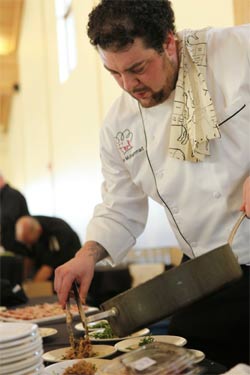 Last Thursday, Eater reported that chef Samir Mohammad of The Village Cork was axed on his way to the Food & Wine Classic in Aspen to represent the restaurant with the Denver FIVE — a slap in the face, according to Mohammad, who says he wasn't entirely shocked by the firing, but disappointed, especially since he hosted a sold out FIVE dinner the previous week. "She had already told me Wednesday night that we were going to have a meeting on Monday, as soon as I got back from Aspen. I already had suspicion that I was getting fired. When your boss doesn't talk to you for three days and says 'we need to talk,' you know something's up."

Early Friday morning (at 12:21 a.m.), Village Cork owner Lisa Lapp commented (as an anonymous guest) on the site: "This is Lisa (owner of The Village Cork). To clarify, I have not 'shitcanned' Samir or have spoken with him about his position at The Village Cork. Thank you." Lapp hasn't returned Eater's phone call, but Mohammad agrees that Lapp didn't deliver the news that he was fired — it was his sous chef, who has since bowed out of the restaurant. "She had told the whole staff by Friday afternoon that I was no longer there. Apparently she came in and did a toast to 'new beginnings' while I was gone, basically celebrating," Mohammad shared.

Mohammad tells Eater that Lapp wasn't satisfied with the amount of time he was spending at the restaurant, which she explained during their Monday meeting. "She basically said I was spending too much time away from the restaurant, and I was like, 'yea, but I'm PR and marketing for you. I'm promoting this restaurant,'" Mohammad said, referring to his work with the Denver FIVE — a chef group organized by Leigh Sullivan Enterprises that takes "Colorado’s elite team of tastemakers to the next level" by hosting culinary events. While Mohammad recognizes his participation with the Denver FIVE does require time away from the restaurant, he says Lapp was aware of the time commitment before he jumped on board with the group. He also says he continued to work 65-hour weeks, even during peak FIVE season. "Basically I was using my days off to do special events."

While Mohammad is disappointed his days in The Village Cork kitchen have come to a close, he's optimistic moving forward. While in Aspen, Mohammad says he was approached about several opportunities. "I'm actually relieved. I felt like I was walking on eggshells for about a year and a half. Now I have the opportunity to do what I want to do, and I'm just looking for the right support — whether it be in my own restaurant, in a partnership or working for somebody. I will pour my life into a place to make it flourish. I think people know that about me."