Share All sharing options for: Frank Bonanno's Luca d'Italia Cookbook For The iPad

Yes ladies and gentlemen, it's true — a Luca d'Italia cookbook is on the way, and it's exclusively for iPad. Chef and restaurateur Frank Bonanno has been diligently working on the first Bonanno Concepts iPad cookbook with the Luca d'Italia crew and Stage Multimedia producer Christopher McNeal. For those who follow Bonanno on Twitter, this may or may not come as a surprise, as he's been tweeting links to teaser videos since he published a snarky blog addressing his encounters with the Department of Environmental Health in May.

McNeal, who also works at Osteria Marco, tells Eater that the interactive cookbook takes readers through the process of throwing a dinner party — Luca d'Italia style — with step-by-step video instruction (all filmed in Bonanno's home kitchen) from Bonanno himself, Luca d'Italia chef Hunter Pritchett and several lead mixologists from Bonanno restaurants. "There's a lot of chefs repackaging their books for the iPad," McNeal shares, "but Frank is the first to go ground-up for the iPad." The yet-to-be-named cookbook will go up for Apple's approval in the next several days, and it will hopefully be available for free download within coming weeks. So, if you were ever curious about things like making Luca's burrata ("meltable gold in your mouth," according WTF podcaster to Marc Maron), butchering rabbits, producing homemade pasta and crafting party cocktails, the wait won't be long.

In the meantime, Bonanno and Luca d'Italia will host a food and beverage social media scavenger hunt around the city next Saturday, June 30th. Teams will compete for the grand prize of dinner for two at Luca d'Italia, with additional prizes for runner-up contestants. View the registration instructions and team rules here, and stay tuned for additional cookbook details. 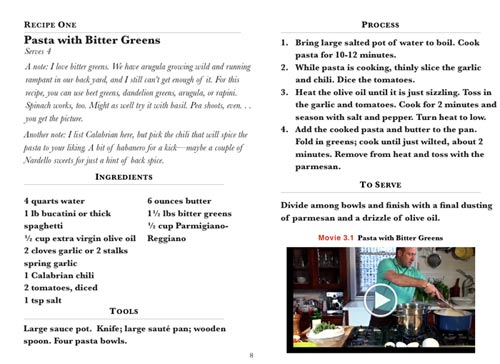 Take a look at the full size image.