Meet Chris Donato, GM of Pizzeria Locale in Boulder. Donato is part of the Eater Young Guns Class of 2012, a group of 16 of the most distinguished young chefs, restaurateurs, sommeliers and industry professionals in the country. 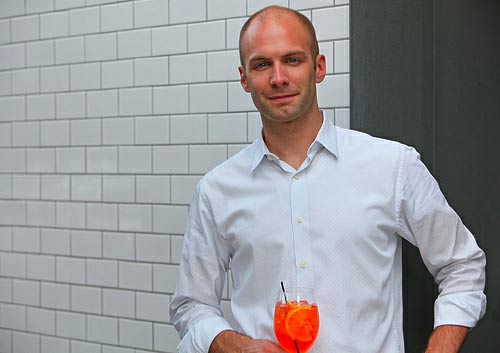 In chef Lachlan Mackinnon-Patterson letter to the Eater Young Guns committee, he mentions that you approached Frasca Food and Wine partner Bobby Stuckey about a job. When Stuckey suggested that you first move to Italy to learn about Italian food and wine, you did it. What was your motivation? I was working at the St. Julien, and I really enjoyed working there, but and I wanted to expand my wine knowledge. So, I set-up a coffee meeting with Bob [Stuckey], just to talk about I should go about doing that. He told me that he really thought I should go to Italy, which I hadn't considered before. So I asked, "How long? A couple weeks?" And he was like, "No, four months." And when I asked when I should go, he suggested I that I go almost right away — two weeks from the time of our meeting, at the beginning of September. I literally left that meeting, went to work and quit my job. I spent four months in Italy working in vineyards and restaurants.

That had to be expensive. Oh, it was devastating. I had some money saved up, but it took me until about now to pay off my debt from Italy. But, it was totally worth it.

So what happened when you got back? I got back, met with Bob and asked for a job, but he didn't have one right away, so I worked for free as a stage every Tuesday. After about three months of staging, an expo position opened up, and I was hired to run food and deep clean the kitchen on weekends. I just worked my way up.

How long did it take you to move up? I was the fastest person to move through the Frasca system, at the time. To work up to serving, it took me four or five months to move through the system. I didn't really start managing until I moved over to to Locale. When Bobby and Lachlan started working on Locale, I just made it really clear that I really wanted the job. Before we opened, I went on a mini pizza tour to places like New York and Phoenix and I read a lot. I just did as much as I could to educate myself.

And you've continued to do that. In Mackinnon-Patterson's letter, he mentions that you now stage in the kitchen once a week. How's that going? It's going great, and it is difficult. It's been a great learning experience. I like learning. I don't ever want to get bored — not that I am — but I always want to keep a fresh perspective. I think it's important to know the back of the house, for this restaurant and for the industry as a whole. It's helped me manage too. If something is late, for example, I can now look back there [in the kitchen] and understand what's going with the tickets. It makes things a lot easier for everybody.

What did you think about working your way up from the expo position? I stand behind it 110 percent. Bobby and Lachlan gave Jordan [Wallace, chef at Pizzeria Locale] and I a lot of freedom over here, and we subscribe to the same system. We hire for one position here, and for the front of the house, it's our polisher position. Think about it, when you get to end of that spectrum, not only do you know the philosophy and facets of the restaurant, but you have respect for all the positions. Even though the polisher position is the lowest position, everyone has worked it.

What's your biggest challenge as the GM of Pizzeria Locale? I think the constant challenge is finding the right people and keeping them in love with their jobs. That's the greatest weight that I feel, that my staff feels interested and motived. If you can do that, everything else falls into place. If you have great people with great attitudes, you can pretty much do anything. It's really just about finding those awesome people and keeping them motivated.

What are you most proud about from a service perspective? I'm really proud the staff that I've been able to surround myself with, and the level of professionalism that they all have. I've worked at places before where it's just a job and people are looking for "a real job," which I always find really insulting. I've had "a real job" for a long time, and we have a staff that believes that this is their real job, and they're proud of it. They like to say they work here, and they want to get better. And I'm not just talking front of the house — it's the whole restaurant. It's a gift.

So it's an attitude. Absolutely. If there's one imprint I hope that I left here, it's a positive attitude.

Here's a question you've probably answered too many times, but since you are a "junior statesman of the culinary world," what are your goals? I would like to open a Sicilian restaurant one day with my partner Jeff. We would love to do that together, someday. I still have some personal goals I'd like to accomplish first. I definitely want to get my advanced sommelier degree, that's very important to me. I don't think I'll go for my master sommelier, God bless those people — I don't know, we'll see. I'd be very satisfied with advanced. People who get their masters, I'm amazing and awe-inspired by them. The amount of the work that goes into that is just insane. I'd also like to spend more time in Italy. If I could do all of those things, I'd be very happy.