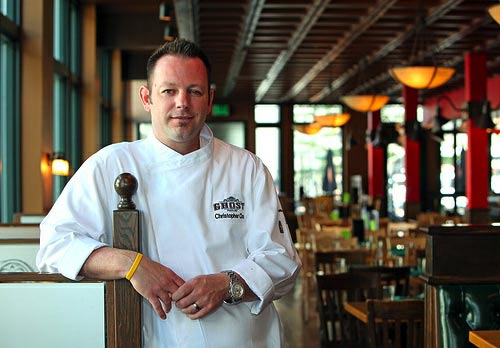 When Ghost Plate & Tap opened in the former Rocky Mountain Diner space back in June 2011, it didn't come off as a chef-driven concept. Beer-driven, yes, but chef-driven? Not so much. But, with the addition of executive chef Christopher Cina back in October 2011, and a relatively new bar program with the leadership of Tara Curry, Ghost Plate & Tap is shaping up to be a different restaurant. Cina recently sat down to chat with Eater about the changes, and he says the restaurant is just hitting its stride.

You've worked at various places across the front range, including more recent positions at Jax Fish House in Denver and Hideaway Steakhouse in Westminster. What influenced your decision to sign-on with Ghost Plate & Tap? I've known the guys from Wynkoop for years, and when I left Hideaway Steakhouse, I was kinda of stuck with what I wanted to do next. I didn't want to work at an independent restaurant — something that was more risky. I wanted to find a company that was stable and had been around for awhile. I made a phone call [to the Wynkoop/Breckenridge group] and it just so happened they were looking for a chef for Ghost, so it was just one of those things that really worked out for me.

It's definitely a more corporate group than a small independent restaurant. Has corporate life been fulfilling? It has been. I'm not micromanaged and I've been given the freedom to run the restaurant how I want to. That was the biggest reason I came on — I needed an outlet to do what I like to do and express my creativity, and to find that under the umbrella of a larger company with a lot of structure, is the best of both worlds.

What was it like before you got here? The original concept was kind of a collection of concepts — of all the Wynkoop restaurants. It was difficult to produce and it wasn't the best idea. They were really pressed to get things done from the very beginning, and I think they could have pulled it off a little bit better. When I came in, it was hard to find a hook for what the restaurant was. It was just hard to define. The idea was to make it more focused. We have phenomenal beers from Wynkoop, Breckenridge, local breweries and national breweries. We wanted to implement a menu that was bistro in style, but that was more geared towards beer pairings as opposed to a bottle of wine.

How, in your mind, is that different than their other concepts? Well, I think a lot of the other concepts are more casual. They're more "pub grub." Wazee Supper Club does pizza, Wynkoop has more English pub-style food, The Cherry Cricket does burgers and so on — but here, it's more upscale. When Wynkoop and Breckenridge merged, they were really well-known for their beers, and they always had good food, but the food was never the focal point. The idea was to really get the food on par with the beer here.

Do you still get guests in here that expect to find the food that was served at The Rocky Mountain Diner? We do. We'll see get people in here who wonder where the fried chicken went. We even have servers from The Rocky Mountain Diner. It was here for 27 years and it had a massive following. I think this building is still associated with that concept. It's hard to go into an established space as something else. It's a tough sell because it was a place built on regulars. We're trying to turn it around and build our own following of regulars.

How have you changed the menu? Most of it is totally new. Lunch is a built-in business, and we didn't want to destroy too much that had been built with Rocky Mountain Diner, but we did make the menu more seasonal. You'll still find a burger, a reuben, a grilled cheese and the Ghost burger (an original since day one). There's things I'd love to change, but it's all about the cliental.

How have to you watched Ghost Plate & Tap change since you signed on? The Coupe Bar, a place for local bartenders to drop in and tend bar for select evenings, started at the beginning of 2012, right? The Coupe Bar started in January, and it was popular right away. The idea was extremely contagious for people. Everyone is pretty excited about mixology these days, and we have some very innovative local bartenders, so it seemed like a natural fit to include The Coupe Bar with the concept. We look at The Coupe Bar as a separate life force at the restaurant, and it's different everytime you come in. Between the new menus, the staffing and the bar program, I think we're just hitting our stride here.

· Previous One Year In Posts [EDen]