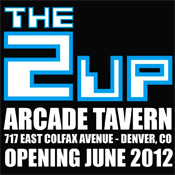 The 2UP Arcade Tavern, an East Colfax extension of Blake Street's popular arcade bar, opened to the public last night in the former Pete's Monkey Bar space. Thrillist reports that both old school and new school gamers will approve, and it sounds like the beer selection doesn't suck either: "In addition to standard Coloradan crafts, their 12 drafts include specialties like a one-off from Breckenridge Brewery called The Fantastic Pour (and made especially for Denver Comic Con), and 1up IPA specially brewed for them by Bristol, so get psyched to take at least 2down." [Thrillist]