Share All sharing options for: Alex Valencia of EDGE Restaurant and Bar on The Evolution of Four Seasons Dining

Welcome to The Gatekeepers, a monthly feature in which Eater roams the city meeting the fine ladies and gentlemen that stand between you and some of your favorite tough-to-get tables. 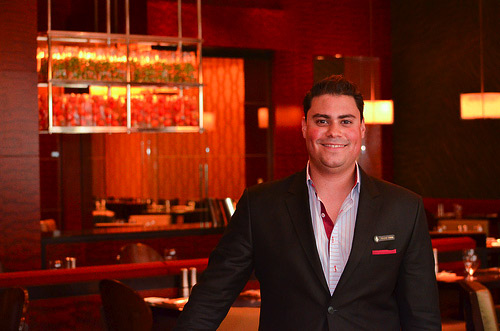 When Alex Valencia was flown to Denver from LA to open EDGE Restaurant and Bar a year and a half ago, the expectation was that he'd spend a month or two getting the restaurant in smooth, running condition and move on to his next assignment. Long story short: EDGE Restaurant and Bar opened in October 2010, and Valencia traded his beachwear for a winter coat to take the GM position. As a graduate of Austria's Tourismusschule Klessheim, one of Europe's premier hotel and resort management schools, Valencia has taken his old school training and moved his way through several Four Seasons properties, including San Diego, Vancover and Beverly Hills. His attitude is hardly old school though — in fact, Valencia tells Eater that EDGE Restaurant and Bar is a prototype for a new wave of Four Seasons dining. Here now, our interview with Valencia, where he reveals what it's like getting VIP treatment (filet mignon for dogs, for example) and why EDGE Restaurant and Bar isn't your average luxury hotel dining facility.

How is EDGE Restaurant and Bar different from other properties? This particular property is a model for future Four Seasons. I know Miami has kind of built on the same concept, in fact, it's called EDGE Steak and Bar. We started a trend by getting rid of the stuffy, old school-style of service. It has to be young, fresh and warm. And I'll tell you, I think the world of my staff. We look for people with heart when we hire — we don't look for robots. It's been contagious in the company. The Four Seasons customer is evolving — they want something with energy... they don't want something stale. They want something fresh, vibrant and electric.

How do you describe the service here? I describe it as casual, but I want to make sure that we maintain the sexiness and aesthetics of the restaurant. I want service to be friendly, genuine and attentive. I think service really has to come from the heart. If a server really cares what you're about and what you're looking for in your dining experience, he or she will adapt and deliver.

The clientele must be very different at every hotel. I'll tell stories about the guests I met at the Beverly Wilshire because there were so many characters — celebrities, royalty. It was amazing, some of the situations I was involved in. Denver is a little more down to earth. We get more locals here, and there aren't as many international guests.

What big names have you seen come through? You look on TV — A listers, B listers, even C listers — and they've all been through the Four Seasons.

You can't reveal specific names? Too confidential? We're very discreet. We do have regulars that will come in, and sometimes they're not with the same lady (for example), and we're very private about that.

What's the rule of thumb for securing reservations at EDGE? We're super flexible, and if we're booked in the dining room, we'll figure something out. For big parties, the sooner the better — especially for the holidays. If you book early or midweek for a weekend reservation, you're set.

What nights tend to be the busiest? Being that we're connected to a hotel, we definitely have a lot of theatre and convention guests. I've seen Tuesdays and Wednesdays that are busier than Fridays and Saturdays. Friday and Saturdays are typically the busiest nights, but I have seen some crazy nights midweek that are busier just because of hotel occupancy.

So say you don't have a reservation on a Friday or Saturday — one of your busier nights. Are you getting a table? If a guest comes in at 8 p.m. on a Friday or Saturday without a reservation, we have tons of options. We'll serve people on the pool deck if we have to, if there's nothing available in the dining room or bar. I've sat a two top in one of our private dining rooms before. Two months ago I put a four top in the kitchen, right by the grill. They were literally getting their food straight from the grill. We have tons of options here.

So you never put people on a waiting list? You always find a table for them? It's not to say it doesn't happen, but here's my philosophy — I don't call it a wait, I call it an opportunity. It's an opportunity for us to show them a different EDGE experience, whether it's a small table in the bar or a glass of wine of us. It gives us a great opportunity to really feature our bar and showcase what we're all about. That bar has a lot of energy.

You recently closed the Level 3 pool bar, which was open to the public. Why? Level 3 was a new concept for us, where we let outside guests come in and experience a behind-the-scenes amenity that's typically exclusive to our hotel guests. The club vibe was awesome, but it was the second summer going in, and we just found that we needed to take it back to being a hotel guest amenity. Every Thursday we were displacing some of the guests because we had to set up for Level 3, so just just decided it wasn't the right fit. Several other properties have or are attempted that concept, and it's not an easy thing.

You just opened a new patio that's attached to EDGE Bar. How's the reception been? It's been really great. One of the inspirations for opening that patio was our owner, who loves to smoke cigars. We basically added a cigar menu for him, and he'll come in and bring his friends. Guests are welcome to come enjoy a cigar. We also have a great scotch list.

Since you pride yourself in delivering the ultimate guest experience, what extreme requests have you accommodated? We definitely accommodate detailed requests. There really is no "no," there's always an alternative. We have this guest who really loves his dog (service dog), and he's a frequent guest here and at the Beverly Wilshire, and we'll serve the dog Fiji water and a kid's filet mignon. No salt and pepper, and it has to be medium-rare. We don't have a dog menu here like we did at the Beverly Wilshire, but for the dog's birthday we did a huge doggie treat and we wrote on it with peanut butter, "Happy Birthday, Mikey!" Dogs are people too, I guess. We love dogs and we love kids.

Any crazy requests for kids? No, but we do have kids DVD players for the table with little headphones. Whatever keeps them happy. We offer a pretty sophisticated kid's menu — very healthy. A lot of the proteins that we offer for adults have been modified for children.

What the challenge of running a hotel restaurant v. an independent restaurant? The biggest challenge is making sure we're identified as EDGE, and not as the Four Seasons. I love the brand — Four Seasons is a leader in the industry, but it's really important that we make ourselves as independent as we can from the hotel. If you work in this company, you know that this restaurant is different. It's not your usual Four Seasons. We've broken the mold, and I've been proud to be a part of this restaurant.