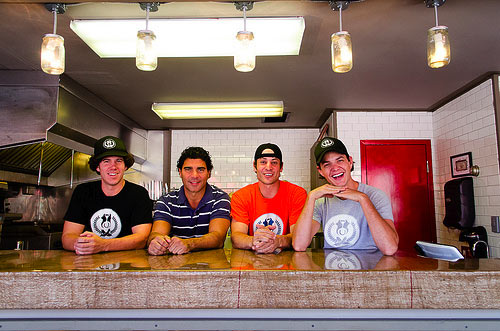 It's been a year since long-time friends and business partners Brad Arguello, Alex Gschwend and Henry Demattis opened The Über Sausage at 2730 E. Colfax Ave., and just under a year since launching the little food truck that could, The Über Truck. The guys admit it was a bit "ass-backwards" in terms of planning (launching a brick-and-mortar before a food truck), but there was no denying how perfect the space across from East High School felt. After all, Gschwend and Arguello met while attending East High School, and the space was small enough to fit their vision. Since Über's creation, the sausage crew has enlisted restaurant consultant Marco Macchiaroli, former regional operations director of Denver-based Noodles & Company and principal of Pasquini's Pizzerias. If plans run accordingly, more Über Sausage is in Denver's future.

How did you meet? AG: I was born and raised in Denver. Brad and I have actually known each other since second grade, and I grew up in a neighborhood that's less than a mile from the restaurant. We both went to high school across the street at East High School, and we also went to college together at Boston College, and that's where we met Henry. After college, I moved to New York City, where I lived for seven and a half years. I worked in business development for two different companies, one was digital market research and the other was staffing. I had always wanted to get back to Denver and open a small business. My parents have small business backgrounds. My grandfather ran a restaurant in the 60's and 70's and my father was a trained chef, so I always had an interest in the restaurant industry. BA: I grew up in Denver as well, and Henry and I actually moved to LA and then San Diego after college. I have always worked in restaurants, and I worked at a place called Geisha House [in LA], which is a celebrity-owned restaurant. And then I worked in a bunch of restaurants in San Diego. My dad had a restaurant when I was growing up [Mataam Fez], so I grew up in the industry. It's what I've always wanted to do, even though he [his dad] always told me not to get into the restaurant business. (Laughs). When Henry and I were living in San Diego, we kind of came up with the concept [Über Sausage]. We were on a golf trip, just sitting around and talking about what we wanted to do. The rest is history. HD: When I got out to San Diego I was working for a financial firm for about a year, and then I started a ticket broker agency. I was looking for something different to do, and Brad and I started talking about the restaurant. I moved to Denver two years ago, and that's kind of where it all started. We got the food truck a year ago, and then we opened the restaurant a month before we launched the food truck when we signed a lease here.

What was opening day like? AG: It was awesome. We were flying by the seat of pants a little bit, but it was great. BA: We definitely had a lot more people than expected. It was a good thing and a bad thing. We were like, "Sweet, this is what it's going to be like forever," thinking 2,000 people would be coming in every day. On our anniversary, I was just blown away by the amount of people we saw from our opening day. It meant a lot of us. You care about what you're doing and then you see all these people who also care. It's a big compliment.

Tell us about finding the location. BA: We kind of did it ass-backwards. We thought we wanted to be near a college campus, but the locations we were looking at fell through — thank god — because they were just a mess. We probably would have lost our shirts trying to build-out those restaurants. Henry and I flew out to Minnesota and got the van [now the Über Truck]. There was only one seat in the van, so we bought a bean bag chair and put it in the back, which was not fun. So we started getting that up and running, and then this location came into play, and it was absolutely perfect with East High School right next door. Being an alum, it's kind of funny being right next to it. We're also open until 3 a.m. on Fridays and Saturdays, so we get a lot of people coming in late at night from RockBar. AG: The plan was to have the food truck first and then build out the restaurant, but the timing just worked out that we needed to build the restaurant out first. It worked out well.

Is the concept what you initially envisioned? AG: From our initial discussions to where we are now, it's probably not much the same. It's continually evolved, and we'd like to think we continue to get better. It's always been a sausage shop, but [initially] we thought we'd perfect a couple sausages — maybe two or three — closer to a European-style, and specialize a couple things. We have kept our menu very limited, but at the same point, we expanded beyond that. There was a lot of trial and error, and thankfully our friends and families were supportive of our creations because not all of them were good. It took time, and when it finally came through, we were really happy. BA: Our concept was to do a small, focused menu. A lot of times restaurants open up and they have 30-40 different things. You walk in and it's a little overwhelming. You find one thing, and you go back for that, but you never go back for something else. For us, it was all about making a really focused menu where every single thing was good.

Has anything been surprising about entering the food truck business? HD: It makes for a lot longer days, obviously, but it's nice because it's a different pace. You can have a little more fun out with the truck because you're usually with drinking crowds. It's nice to get out of the restaurant and see different people. It helps us all get away, even though there's longer hours. AG: It's a lot of hours, but luckily we have five employees that help us out, so we do get some time off. We never had notions that this would be a 9 a.m.-5 p.m. business. It's a lot of hours, but there's a lot of passion behind this. The hours can become overbearing at times, but we all have passion.

What lessons have you learned during the first year? AG: Oh, I don't know if there's one lesson, but if you go back to the first day we were open, our speed has vastly improved. For me, it's just been a slow progression. We've learned how to get more efficient. Even little things, like how we store our bread, make a difference. BA: The biggest thing I learned is that working 14-hour days is exhausting. I loved it, and I'd do it over again, but it's hard starting a business. You don't realize how much really goes into it. I alway say, "The best thing about being your own boss is that you're your own boss, and the worst thing about being your own boss is being your own boss." There's no calling out sick. On Thanksgiving everyone was gone and I had to come in a 6 a.m. because a drunk guy decided to send us a little present by throwing a rock through our window. It's little things that you don't expect that you have to be there for. It's like having a little baby.

Do you ever get compared to Biker Jim's? BA: Yea, we did at first. When we first started, we didn't get a lot of slack for it, but people did come in and tried to make comparisons. Don't get me wrong, he [Jim Pittenger] did a really good job with what he's doing, and we all respect him for that. He focuses on exotic an gamey meats, and we're all about combining different flavors and making a solid sandwich. One of the biggest differences is that we're making sandwiches with sausages on French baguette. It's about the sandwich. People also try to compare us to hot dog vendors, but we're really trying to focus on sausages. It has been hard to disassociate ourselves from hot dog stands.

What was it like entering the food truck community in Denver? BA: Everyone was super supportive. We were in fairly early. It's crazy, when we started our truck last year, there were about 30-40 trucks here in Denver. And then this past year, there were over 200 applications for Civic Center Eats. That just shows how big the food truck scene has grown. By all means, we weren't the first, but we were in the second wave of trucks. They [other trucks] may make fun of out little van (chuckles), but they show us respect. The first time we pulled into Civic Center Eats, everyone laughed at us. The best part of it though was pulling out. Everyone has to wait to get out of Civic Center, but we literally took out truck and just zipped out.

Why did you pick that little van? BA: Honest to God, it was funny looking. It wasn't a huge truck and over what we needed. It just suited us. Small truck, big sausages. It's the little engine that could. HD: Some people just come by to take pictures of our truck. Some people pose with it. BA: One girl told me she wished she couple put it on a keychain and put it in her pocket. I literally laugh every time that thing pulls in, even after a year. You don't get a perspective until you see it driving. It's like a little short bus.

What's in the future? BA: We're definitely looking at expanding. In our minds, our plan has always been to have a lot of small restaurants. We understand that what we're doing is very niche market, but we're excited to open another spot. We're always looking. AG: The problem we run into is that a lot of spaces are bigger than what we want. We want small. The good thing about that is that we're picky. We're not going to open a second location just to open a second location. It has to be right.

What's been the most rewarding aspect of opening your own business? HD: I think providing good food. Plus, having three friends working together — it's a lot of fun. Yes, it's long hours, but we always have fun. BA: It's a learning experience. That's the best thing about restaurants. When it comes down to it, nothing is in line — it's always a surprise. This isn't a mundane job.

Check out Über Truck every Friday at Denver Beer Co., where magic happens with sausages and beer.