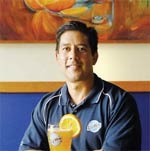 Is Blue Moon brewer Keith Villa the most influential beer man you've never heard of? As AdAge suggests, "he's not some fly-by-night home brewer out for a little fun in the garage," but rather a pioneer of Belgian beer in the United States. Villa points out that Blue Moon wasn't fast to catch with the public: "It inspired me to work that much harder, to prove they were wrong, that there was something in Blue Moon, because I honestly believed that someday people would appreciate Belgium beers." [AdAge via BP]