Share All sharing options for: Robert Thompson and The Revival of Brasserie Dining at Le Grand Bistro & Oyster Bar 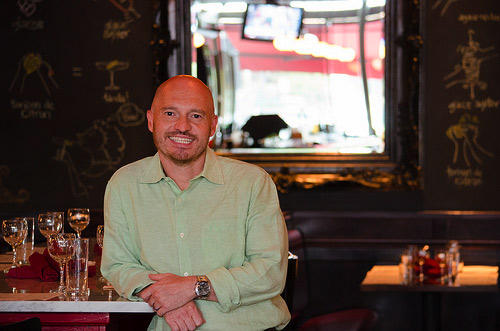 Chef/restaurateur Robert Thompson is easily one of the city's most ambitious restaurant developers, and partly because the man just doesn't sleep. He's also wildly passionate about dining culture, and his visions for Denver's restaurant landscape continue to build. Last August, Thompson introduced the city to Le Grand Bistro & Oyster Bar, his vision for brasserie-style dining in Mile High. He admits it was a risky concept, especially since his first attempt ended in failure when Brasserie Rouge closed in 2004. Sometimes risks do pay off though, and in the case of Le Grand, a risk yielded success. Eater sat down with Thompson to chat about the first year at Le Grand, and he also shared an update about the highly-anticipated opening of Punch Bowl Social and the rebirth of Argyll.

Let's go back to opening day on August 29, 2012. What was it like?
It was somewhat dream-like, and it was the smoothest opening I've ever done. This is my eighth restaurant, so I guess we're supposed to get it right at some point, after doing enough of them. We finally got it right here. It was a special day because it was kind of a full-circle event for me. I had a French restaurant before called Brasserie Rouge, and Brasserie Rouge is the only restaurant I've ever opened that failed. It's tough to have a restaurant that fails. I chalked that failure up to a bad location, because I know the restaurant was outstanding. It was a brasserie that was very similar to what we're doing here [Le Grand], but Denver wasn't ready for it and we were in a bad location. So doing this [Le Grand] and pulling it all back together — taking a second shot at the brasserie concept in Denver — was risky. When you're 41 you're not supposed to talk about a bucket list, but redoing that brasserie concept in Denver was on my bucket list. I had to do it.

So if you blame the location for Brasserie Rouge's failure, what intrigued you about the location for Le Grand Bistro & Oyster Bar? How did you know this was it? You know, this was one of those deals that was a little different. Typically I go out and find a location when I'm getting ready to do something new. I was getting ready to do something new, and the timing was right, but the owner of this building [previously Baur's Ristorante] came to me and said, "I have an under-performing restaurant, what do you think I should do with this location?" We had a lot of meetings and I came up with a recommendation for him, for what kind of tenant he should get, and he said, "Well, why don't you do it?" And that's kind of what I thought he was going to say, and then we negotiated the deal. I knew, from the first time I walked in, that it was supposed to be a brasserie. This space looks like a grand brassie from Paris — the high ceilings, the mosaic tile floors — it didn't look like this, exactly, when we came across the space. We turned it into this, but it had the infrastructure and key elements that every brasserie is supposed to have. It was pretty simple for me to decide on putting a brasserie in here.

How far does your fascination with brasseries go back? I've been traveling to France my entire career, and even before I was a restaurateur. I've always loved French culture, and I love the tradition of the French bistro and brasserie. It wasn't until 2000 that I was spending time in Paris and thought to myself, "Wow, no one is really doing these brasserie concepts in America." Then a year or so later, Balthazar and Pastis opened up in New York, and to wild acclaim — rightfully so. At least in New York, it was being proven that the brasserie and French philosophy could be imported into America, outside of the white table cloth, stuffy-feeling that you see in a lot of French restaurants. Then in 2003, I was on another trip to Paris and came back from that trip deciding that I was going to find a location for a brasserie. This idea of doing approachable, everyday French peasant food — brasseries are the diners of France. It's just what everyone eats, everyday. We wanted to introduce that, and I went from being a fan, to being obsessed.

You've been reviewed by the city's major publications. How do you feel about the way critics have received this restaurant? How do I delicately answer this? I really appreciate the thorough inspection that Westword and 5280 afforded us. I've been pretty silent about the review we recieved from The Denver Post, other than internally with my people. I'll just say it — William Porter [Denver Post dining critic], we know what he looks like and we keep a picture of him in the kitchen, like a lot of restaurants do. We knew the second he walked in the door, every single trip he was in here. We knew what he ordered, and I was standing over his food as it was prepared. It was as good of food as any food he should expect to eat, anywhere. And for some reason, he didn't see it the same way I see it — the way my chef sees it — the way my general manager sees it. We know what we served him, and it was something we were proud of, and I'll say it's the best we can do. If he doesn't appreciate it, that's certainly his right to voice his opinion. But, William had a little issue with us at Argyll one time, before he was a food critic, and it's our personal opinion that there was a carry over. He got into an argument with one of our waiters over what an heirloom tomato was.

What's been your proudest moment with this restaurant? Probably the 5280 honor — being listed as one of the best new restaurants. I have an immense respect for Amanda Faison [food editor at 5280], and I think she's a consonant professional, as well as a gifted writer. I enjoy reading everything she does, and combine that with that fact that she writes with integrity, makes it even more special. When she gave us that honor, it really meant a lot. I'm also proud that we can pay our rent and staff everyday. If a restaurant makes it through the first year, chances are it'll make it. Restaurants usually fail in six to nine months. We're kickin' butt, and we're really happy about it.

In recent months you brought Anika Zappe on board as beverage director for all of your projects, and you promoted executive chef Sergio Romero as the chef of all of your projects. How's that going? The way to describe it is that I have my high-level team now. Anika was the last piece in the puzzle that we needed. I've known Sergio for a long time, and he's my longest tenured employee. Anika will spend most of her time at Punch Bowl, but she'll also spend time overseeing the beverage program here and all other subsequent projects that I do. We'll be reopening Argyll in 2013.

How's the search going? It's going well. We're negotiating right now, so I can't say much. We don't want competition for the space. We did have a deal in Baker that didn't pan out. I love the Baker area — I think it's up-and-coming, but we have locations we're looking at in the Highlands. Argyll is a very special concept to me. We were in a bad location in Cherry Creek, and in spite of that, we were able to win best new restaurant and some other awards that we were proud of. I'm not going to do another Argyll until its the perfect deal.

And how about Punch Bowl Social? You've encountered some hurdles. Many hurdles. We had development/budget issues on the project, and as everyone has heard by now, there was asbestos. We uncovered some skeletons with the building because we gutted it down to its bones and built it back up, and it's been a very expensive process. Funding took the longest of all. We just closed on it, and that's why we have a hard opening date because now we know how we're going to pay for everything. Other factors are boring. For awhile there was delay, and some of it has to do with a complicated operating agreement for the company. It was challenging, but we're done, and we've accomplished it.

So here's the burning question: how do you juggle it all? Le Grand Bistro & Oyster Bar, three Punch Bowl Socials and the rebirth of Argyll — what the secret? Don't sleep and jog a lot. When most people would be laying on the couch, resting, I take a jog. It just helps me stay mentally and physically strong, but I don't do any of this alone. I have really good people that don't sleep very much either.

Looking towards the next year, what are you goals?
Our goals are to continue to intrigue the Denver diner. There's a lot of classic, French peasant food that we haven't explored yet, and we want to put our own twist on it. I'd also like Anika to receive some recognition and for folks to understand what she's doing from a craft cocktail perspective. But in terms of the restaurant, all of these micro goals have to be a part of what we're trying to do ultimately, which is turn Le Grand into an iconic, forever restaurant. We want Le Grand to be here for 25 years, so our goals are not myopic. We're going to need to show a lot of patience. You don't become an icon overnight, and only do it by sticking to your knittings on a daily basis and not looking too far out. It's about keeping that larger goal in mind. Our goal is to be an icon — a Denver icon.

Anniversary Special: All next week, August 27-31, Le Grand is giving away 1/2 price lunch tabs to all guests.