With the rising popularity of farm-to-table restaurants, many local restaurants have stepped-up their game by sourcing locally — like tending to their own gardens and farms. Restaurants like Bittersweet, The Squeaky Bean and Sushi Den all grow a portion of their own produce, supporting nearby farms for other needs. From small urban gardens to 120-acre farms, Eater has culled eight restaurants on the Front Range that take their food-supply chain seriously, fueling their menus with everything from house-grown produce to restaurant-farm-raised pork. 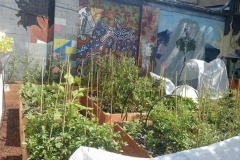 Root Down: 1600 W. 33rd Ave.
The Root Garden, on-site
Root Down’s vegetable-forward menu from Chef/owner Justin Cucci has an 800-square-foot, on-site garden called Root Garden that was just installed this year. The garden’s harvest provides ingredients not just for Root Down, but also for its sister restaurant Linger. They grow heirloom tomatoes, beets, kale, chiles, herbs, zucchinis and sunflowers (used for their seeds). This allows guests to sit on the patio and view the garden directly, where a large portion of the ingredients for their dishes grow. 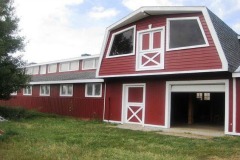 Fruition Restaurant:1313 E. 6th Ave.
Fruition Farms Dairy and Creamery: Larkspur
Chef Alex Seidel and seasoned maitre d' Paul Attardi co-own Fruition, the 50-seat neighborhood bistro that specializes in elegant comfort food. In early 2009 they purchased a 10-acre farm, Fruition Farms Dairy and Creamery just outside of Larkspur, where they raise sheep and chickens, grow herbs and vegetables, and make their own cheese. In particular, Seidel is making Colorado’s first sheep's milk ricotta, which has become popular with other Denver restaurants. For the winter’s harvest, Fruition Farms has also a greenhouse to include year-round growing. 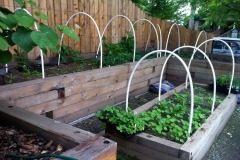 Bittersweet: 1600 W. 33rd Ave.
Bittersweet’s Urban Restaurant Garden: on-site
It’s no wonder that chef/owner Olav Peterson’s of Bittersweet comes with the tagline: “our farm in the city”. Olav only needs to step a few feet from Bittersweet’s kitchen over to his 600-square-foot organic garden that surrounds the restaurant, where he and his team pick from the garden throughout spring and summer. Bittersweet’s garden patio, a fundamental design element since the restaurant was built in 2011, grows herbs like rosemary and mint, edible flowers, and a variety of vegetables. 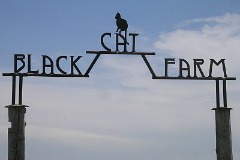 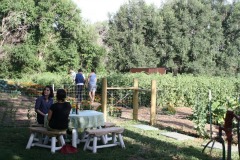 Watercourse Foods and City O’ City: 837 East 17th Ave. / 206 East 13th Ave.
Hazel Rah Farm: Lakewood
In 2009, Dan Landes of Watercourse Foods and City O' City, converted his backyard in Lakewood into a micro farm with the vision of supplying organic produce for his restaurants. His one-acre home plot called Hazel Rah Farm (a Watership Down reference) has since grown with the help of hiring the company Agriburbia, which has amped his operation by installing an irrigation system to help with efficiency. In 2012, Landes harvested over 5000 pounds of produce, with plans to triple output this season. Landes grows a variety of vegetables, including beets, heirloom tomatoes and rainbow chard. The restaurants use the remainder of harvest supply for canning and pickling items like kimchi and pickles. 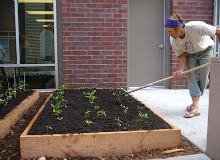 Pizzeria Basta: 3601 Arapahoe Ave., Boulder
Pizzeria Basta’s Urban Restaurant Garden: on-site
Chef/owner Kelly Whitaker of Pizzeria Basta, a 40-seat all-wood-fire oven eatery and pizzeria, has constructed an urban garden alongside his space in the Peloton Building development. Whitaker, whose grandfather was a farmer, started with 100 basil plants from Abbondanza (a local organic farm) in a plot outside of Pizzeria Basta. He now plants chard, kale, arugula, mizuna and tomatoes. In addition to the outdoor garden, he has a small window planter with herbs that come from Altan Alma Organic Farm. Although his garden space is small, he supplements the rest of his ingredients with local sources. 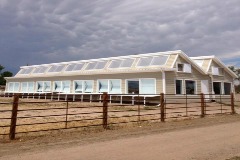 Sushi Den and Izakaya Den: 1487 South Pearl St. / 1518 South Pearl St.Den Farm: Brighton
For 27 years, brothers/co-owners Yasu and Toshi Kizaki of Sushi Den and Izakaya Den, have ranked at the top of Denver's Japanese's restaurants. In 2011, The Den Corner Restaurant Group purchased Den Farm, a 6.7-acre farm in Brighton, to supply the restaurants with non-GMO vegetables. In November of 2011, Den Farm built a 3,000-square-foot solar greenhouse where no natural gas source is necessary, ensuring they can grow locally grown food, year-round. Den Farm is experimenting with 400 vegetable varieties to see what grows best — some of which includes the likes of citrus trees, Thai chilis, shishito peppers, mitsuba, mung bean, kabocha, orchids and lemongrass. 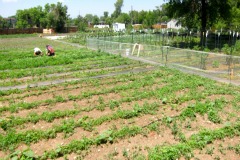 The Squeaky Bean: 1500 Wynkoop #101
Squeaky Acre: Lakewood
The Squeaky Bean, a newly reopened and wildly popular restaurant from co-owners Johnny Ballen and chef Max MacKissock, also leases a one-acre farm called Squeaky Acre in Lakewood. The farm grows a majority of the restaurant's micro-greens and produce, including squash, heirloom tomatoes, peas, collard greens, swiss chard, beets, watermelon radishes, herbs and edible flowers. Ballen plans to purchase their own farm in a few years with plans of raising chickens and growing fruit trees. For off-season, they also have a temperature-controlled flatbed in the Highlands.