Dev Ranjan, a 'Sweet as Pie' Sommelier with True Skill

Share All sharing options for: Dev Ranjan, a 'Sweet as Pie' Sommelier with True Skill

Welcome to Front & Center, a series highlighting front of the house professionals in Denver restaurants. Right now, blogger Ruth Tobias of Denveater and author of a Food Lovers' Guide to Denver & Boulder writes about Dev Ranjan, sommelier at Black Cat and Bramble & Hare: 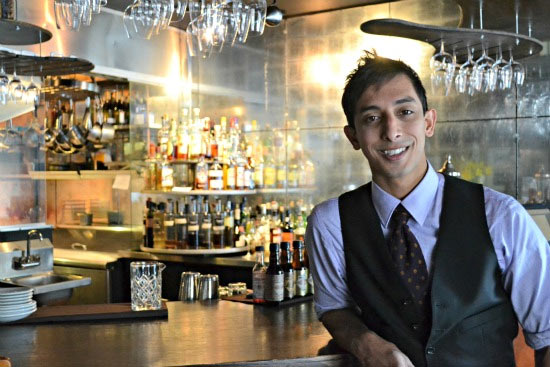 As it turns out, Eater has recently covered one of my favorite gentlemen-scholars: Dev Ranjan of Black Cat Bistro and Bramble & Hare. First of all, he's just as sweet as pie — so exuberant, not to mention extremely articulate on the subject of wine. He listens closely and responds thoughtfully. Obviously he's already found his calling, at an age that most of us were still knocking back Jack and Diet Coke (at least I was).

Second, we clearly share a palate, so there's that. It seems as though he's always featuring the exact thing I'm digging at any given moment: Lagrein from Alto Adige, Zweigelt from the Burgenland, Xinomavro from Naoussa in Greece, killer grower champagnes. These aren't just conspicuously geeky picks — they convey a sense of place as surely as Eric Skokan's food does. Basically, if you're willing to take a chance on a bottle, he's the guy to take it with.