Why Johnny Ballen is The Epitome of Welcome

Share All sharing options for: Why Johnny Ballen is The Epitome of Welcome 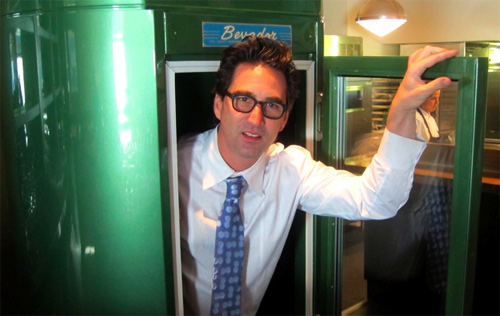 People insist I have a crush on Johnny Ballen – and you know what? They're right. It's definitely not because of his wacky, ever-changing hairstyles, although there was a time in high school when I had a similar mullet to what he's close to sporting now; it's not because he's a snappy dresser (provided "snappy" equates to lime green monogrammed-stamped polyester?to go with the mullet); and it's certainly not because he's offered to introduce me to the buffet at the Golden Corral. In fact, these are all reasons why Ballen, the chief Bean of the Squeaky Bean, is a complete dork.

Okay, here's the truth: When I walk into a restaurant, the first face I want to see is one that makes me smile, a face that has "welcome" written on it, even if it's scrawled backwards in dried blood. For me, that first impression from a restaurateur is normally indicative of what I can expect during the duration of my dinner, and a sour-faced owner typically means a sour staff — on the floor and in the kitchen. No thanks.

But Ballen is the epitome of "welcome." He's the guy whose eyes twinkle like lightning bolts illuminating the night sky when you walk through the Bean's heavy doors; he's the guy who recognizes every regular, and the owner who spreads his smile just as wide to newcomers whose favorite restaurant may very well be the Golden Corral. He's predictably hilarious, which means that if you're having the day from Hades, he won't stop telling jokes until he gets a giggle — or at least a chuckle. And in light of the number of my days that fall into that dark abyss, I'm appreciative of that.

He's beautifully adept at extinguishing fires with grace — rather than fighting fire with fire — and even when the house is full, as it very often is, with demanding guests with higher-than-the-heavens expectations, he's charmingly efficient, even-tempered and instinctively intuitive to potential calamities. And when something does go awry, he fixes it. With a smile.

Is he perfect? No, not by a long shot. Like the rest of us mere mortals, he has his (rare) oops! moments, but at the end of a night out at the Bean, when you're still stupefied by chef Max MacKissock's plates of sheer beauty, Ballen will be the one who sends you on your way with a genuine dose of gratitude that extends past a fleeting crush.