Welcome back to The Gatekeepers, a feature in which we roam the city meeting the fine ladies and gentlemen that stand between you and some of your favorite impossible-to-get tables. 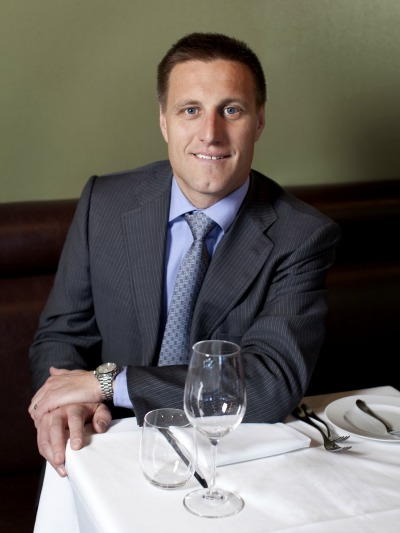 With just dinner service offered, what is your busiest night at the restaurant? Our busiest night is probably Saturday because it's all inclusive. For example, if you're working in South Denver it's hard for you to get here by 6 p.m. in Boulder on a weeknight. They do do it and I am so humbled and blessed that they do, but more of them can do it on a weekend.

Do you offer walk-ins? We always have tables open for walk-ins. Always. The easiest way to eat here at 7 or 7:30 p.m. is to come in as a walk-in. We see a reservation and we except a two-top to be there for two hours and 15 minutes. So if I seat a table at 6 p.m., I'm going to rebook that table at 8:15. I'm really conservative in that sense. I don't want to rush people. I want them to have a nice long experience. I don't want them to even know there is a turn. A successful night for us is when everyone gets up, that table is reset and the next guests walk in and didn't even know we did two turns.

How far out are you booked for reservations? That's been the biggest myth we've ever had here. Everyone's like, "Oh you guys are always booked." We've been open eight years and were never always booked. It's the biggest curse and myth. I firmly believe there's a certain part of the dining population [in Boulder] that isn't used to reservations. We live in the most educated city in America. Right? The most post-graduate degrees anywhere in the world are here. But we're the least educated with reservations. Period. And I love living here and having my restaurant here. No community is perfect. There isn't a reservation culture here so it's hard for them to grasp it. They call us for a two-top on a weekend and we don't have something right when they want, so they think we're always booked. There are a lot of secrets to dine here and were trying to broadcast them. It has taken a while people to understand.

What are those secrets? One of the easiest ways to get reservations here is to come in mid-week. Just walk in. I don't know if there has ever been a time that you couldn't walk-in at 7:30 mid-week since we've been open. Never been a problem. Also, we don't book our walk in tables. There are guests who have dined with us 150 times since we've been open and they've never needed a reservation.

Frasca is synonymous with personalized service—have you ever had a service dilemma where you were able to turn it around into something positive? First of all when we make a mistake or something is misunderstood, it's one of the greatest gifts of our craft. Look, I'm a hospitality craftsman—that's my deal. If I wasn't so into that I wouldn't be here every night. I'd have someone else do it. When you have a problematic misunderstanding or service flaw, that is one of the greatest chances to build a relationship with someone.

I remember one story. This is pretty good. This was at French Laundry. So Blue Man Group was in at French Laundry. And one of the guys is wearing the most stunning all-white Gucci suit I've ever seen. All white. Dude, it was so intense. They have a party and they are just getting after it. It's an all night affair. They send their driver away because they want to do another cheese course. As we call the driver when they're finally ready, he's at Bouchon but he had just sat down to a steak. Blue Man Group says no problem and decide to order another bottle of wine. I'm almost out the door service wise already, and he orders the most purple wine you could ever imagine – a Petite Sirah from Turley. I pour the whole table, then I get back to him and one nuclear bomb drop of purple madness lands right on his chest. I could see it. Everyone at the table saw it - it was like slow-mo. In the end, it became the best experience ever for both of us. Thank god he wouldn't let me pick up the tab on his Gucci suit but the deal was he was able to call me whenever he wanted wine service. So he could be in Vegas and I would get a call. It was awesome.

Have you ever been offered a bribe or gift from a customer who wanted to be seated immediately? I mean my whole career, well definitely the last 18 years of my career. The handshake to me is so short sighted. Because really, my goal isn't to put an extra $20 in my pocket—my goal is to take care of that guest. Giving me a $20 or even $100 handshake isn't congruent to a table or why I walk on the floor at night. If someone gets me $20 because I did extraordinary wine service for them that's one thing, but to pawn Bobby and get a table, it's not going to happen. I care about these guests that are already here, so much, and I want to care about that guest also. I'll find you a way to sit down, don't give me the $20. We'll get something figured out.

H?w has Locale and Caffe been doing since your expansion and their opening? Oh it's been great. It's been really fun. It lets us touch guests that are Boulderites that might not come to Frasca.

Can you tell us more about your wine Scarpetta and the genesis for the wine project? Scarpteta we started in 2006 it has been a lot of fun. It helps Frasca and Frasca helps Scarpetta. I don't think we would have been in Fruili as many nights a year, as we are, but we have to because of Scarpetta. We wanted to start making Tocai, well it used to be called Tocai, now it's called Friulano grapes, and that's what we started with. Then we got access to some great Pinot Grigio grapes and Sauvignon Blanc and that's how we have grown the label from there. We work with some wonderful families in Fruili.

You recently were a nominee for Wine Enthusiast's Sommelier of the year and one of Travel & Leisure's best Italian restaurant in the U.S., congratulations! Frasca and Lachlan are also recipients of a plethora of awards. What do you think the key is to your continued success? Consistency. First of all, it's humbling. I'm honored that anything comes our way. If you look at it trajectory wise, we've been open eight years and we're still both here, grinding it out all the time. If you look at Food and Wine Best Young Chef or James Beard Rising Young Chef and you go eight to 10 years out from that award, there aren't always people that are doing it to it eight to 10 years later. This business is a grinder. I think with that consistent grind, good things will happen.

There's a rumor that you're scheming on something for Denver. Does the rumor have any traction? Oh yeah! We would love to do Pizzeria Locale in Denver.

Are you looking there right now? Very much so.

You wanted to open a market inside Union Station. Is a market still a concept you'd like to open? We tried to do that and the board of directors didn't side with the developer who had approached us. The developer that was pitching it was Mark Falcone and it would have been a dream to do that with him, but he didn't get the deal. I really love his whole vision.

What can we expect from Frasca in the future? What we do, is we do our little thing. We're here with an open door to give you our form of Fruiliano cuisine and hospitality. And it's a lot easier to get in here, than anyone ever thinks. It has always been that way.