Share All sharing options for: Beast + Bottle to Go Into Olivea Space 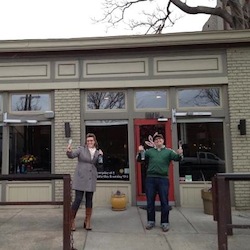 Beast + Bottle, the new restaurant venture from Paul and Aileen Reilly is officially taking over the Uptown space that housed Olivéa until last night. The brother and sister team behind the former Encore restaurant, have swiftly made the move to take over the Olivéa space after they gave up the space originally selected, the former Cherokee Dining.

Beast + Bottle, in this hot spot location on the buzzing 17th Avenue, will be open six days a week. According to Aileen Reilly, brunch will be served from 10 a.m. to 2 p.m. with dinner service beginning at 4 p.m. The rumor is that the restaurant, whose catchy name plays on food and wine, will be up and running in the next couple of months.

The restaurant that the Reillys previously owned, Encore, closed at the end of April last year after an agreement on the lease rate could not be reached with the landlord. That space, located on Colfax, will soon be occupied by a new Udi's restaurant.