Share All sharing options for: Yasu Kizaki of Sushi Den and Izakaya Den on Sourcing Fish From the Japanese Fish Market

On the House is Eater's column that goes behind the scenes of the restaurant business, written by the owners, operators, chefs and others who make our favorite establishments tick. Today, Yasu Kizaki, co-owner of Sushi Den and Izakaya Den, recounts the journey of sourcing fish directly from a Japanese fish market. 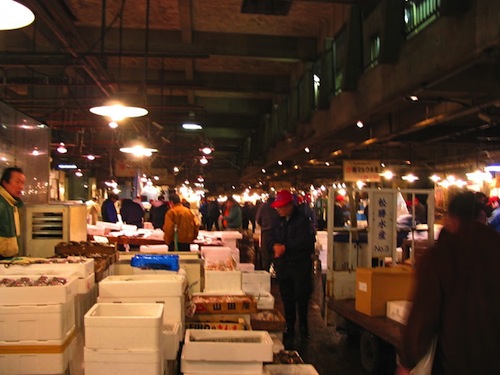 In the past, I've always stayed behind and held the fort down in Denver, while my brother, Toshi, traveled to Japan to visit the fish market where we purchase the fish that flies fresh directly to Sushi Den in Denver. Now it was my turn to journey to my homeland and observe the fast-paced world of the Japanese fishing industry for myself. My visit to one of the largest fish markets in Southern Japan, was a fascinating and truly awakening experience.

Some part of me recognized I had safely arrived on Kyushu Island, one of the southernmost islands in Japan. Fukuoka is on the Sea of Japan, with a population of just over 1 million people and is the major city on Kyushu Island. I was totally exhausted when I arrived at my youngest brother's place at 11 p.m. on a December night last year. After three airplane rides and some 24 hours after leaving Denver, with barely any sleep, Koichi, my brother, mentioned, "It is late, you should go to sleep. I will wake you up at 2 a.m. to go the fish market." "Sure," I responded without thinking much. I was simply too tired to ponder what he had suggested at that time.

Koichi goes to the fish market at 2:30 a.m. every day to purchase the best fish available for that day for both Sushi Den and Izakaya Den. I looked at the clock with my eyes half closed. It was precisely 2:15 a.m. It was as if my brain had completely stopped functioning. I was still more than half asleep and thought regretfully, " Didn't I go to sleep just a few minutes ago? Why did I agree to go to the fish market with him at this early hour of the day? I just need to sleep more." I was so exhausted.

When we left the house just before 2:30 a.m., it was pitch dark and freezing cold - the bone-biting, deep cold of a humid climate. Japan in winter is one of the coldest places on earth. The day before had been the coldest day of the year in all of Japan. I could see snow flittering in the beams of the streetlamps. My breath was already frozen. Fortunately my brother's home and the fish market are only 5 minutes away from each other.

"There it is," my brother pointed out. I could see many lights in a huge building looming in the darkness. When we got closer, I could also see many fishing ships docked right beside the building, with men unloading the fish on to a platform where they auction freshly caught seafood every morning. "Oh my! This building is huge, just so huge! I have never seen anything like it," I said. "It is the size of a football stadium," Koichi replied. Space is a premium commodity in Japan and the Japanese are experts at building above and below ground to provide the maximum amount of space. To see a structure this size, which dwarfs everything nearby, alive and glowing like a fortress in the middle of the night, was a sight to behold.

I was finally starting to wake up, anticipating the excitement of what would happen in my fish-buying visit. When I entered the building, the place was already bustling. The smell of the sea and fresh fish permeated the building. I felt as if I were on stage in a play. This drama plays out every single morning at 2:30 a.m. It is pitch dark outside, but inside the bare light bulbs hanging from the high ceiling brightly light-up everything "on stage."

The market is packed with every variety of seafood. Many buyers are wheeling and dealing with a specific purpose in mind: to buy the best available fish at the best price. All the buyers are your competitors. At first, it looked very chaotic, but as time went by, I could see a perfect rhythm and harmony in what happens there. While the world is still deep in sleep, some 1000+ people are already busy in buying and dealing.

My brother was busy negotiating prices with the wholesalers while I took photos. "This is the place to do the serious fish business" my brother whispered, as he advised me not to take photos too obviously since the fishmongers are not used to having a camera aimed at them and their fish. Before I knew it, it was just after 5:00 a.m. and over 2 hours had easily flown by. Daybreak had slowly begun. It was no longer pitch dark. My brother had finished purchasing and I was finally wide-awake. I was getting used to this atmosphere and I liked it a lot.

"Hey brother, Yasu, I will need to find two more mackerels for the Denver Sushi Den," he said, then started walking up and down the aisles, disappearing into the crowds at once. He was looking for two specific sizes of mackerel in the next half an hour as the market was starting to wind down for the day. It literally dawned on me as the day was dawning, "This is what makes Sushi Den so unique. No wonder Sushi Den's fish is so fresh. Japanese consumers are the most discriminating of seafood consumers, and the highest grades of fish are sold in Japan. We have direct access to this fish."

Within an hour, this fish, just arrived from the nightly fishing ships, is cleaned, vacuum packed and on its way to Denver. I thought, "I wonder how many people actually understand the process of sourcing our fish." I was grateful to Koichi for his dedication and commitment to what he does. While the world is still deep in sleep, all he thinks about is his next trip to the fish market. And he does this every single morning."