Share All sharing options for: 2013 Food and Restaurant Predictions

During the last few days of 2012, friends of Eater weighed in on a few questions to close out the year: their top restaurant standbys and favorite newcomers, their best meals, and their restaurant break-ups. To kick off the year, Eater asked for trend predictions for the next twelve months. Eater welcomes your thoughts in the comment section. 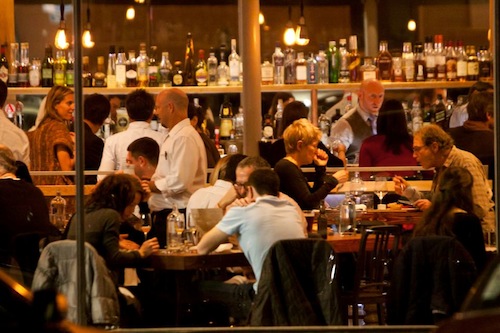 Question: What are your dining world headline predictions for 2013?

Amanda Faison, food editor, 5280 Magazine: It'll be interesting to see if Peruvian cuisine really takes off. (I say this only because Peruvian has been predicated as the hot new thing for at least eight years running.) Other than that, I look forward to seeing the fried chicken trend take hold.

William Porter, restaurant critic, the Denver Post: Hmmm. How about "Guy Fieri Still Smarting From Pete Wells' NY Times Evisceration" or "Pet Eating Like Country Isn't In Goddamn Recession." OK, that last one was a direct theft from The Onion, but if you saw my cat at the kibble bowl, you'd understand why I had to go with it.

John Broening, chef at Spuntino and columnist for the Denver Post: Here is what I see happening in 2013: craft breweries like BSB who do one thing superbly (in BSB's case , Red Ale); Boulder-based restaurant groups like Frasca , Oak on Fourteenth and the Kitchen putting their stamp on Denver; more interest in not just local produce but in locally developed , organic seeds ( Abondanzza Farms is a leader in this regard); more supper clubs (like Noble Swine, our own at Spuntino's). The drought will cause a continued rise in meat prices and see more dishes that emphasize meat as an accent rather than as a center of the plate. Alas, an increase in customers with dietary restrictions and allergies; most of these food issues are environmentally related, and as our environment deteriorates, it's going to be a bigger factor. Here's what I would like to see: a relaxation of local laws allowing small farmers to process their own animals. If we don't have lots of good local chicken and rabbit, it's because farmers have to pay exorbitant fees to process them off site. Fewer steakhouses: they're all gastronomically reactionary and environmentally disastrous and a graveyard for culinary talent. More independent pastry shops, salumi shops, chocolatiers and cheesemongers doing better; everybody talks about how great these places are, but then goes and shops at Whole Foods instead.

Jessica Hunter, Eater Denver Contributor: Tasting menus! Maybe it's wishful thinking, but I want diners to demand more tasting menus. It's a great way for kitchens to highlight creative, seasonal, and experimental dishes with less risk. Less bacon, more offal. Or maybe I just want more offal. I love that restaurants are starting to flex their muscle and dig into the whole animal. Restaurants get the hint and post pertinent details on websites.

Grace Boyle, contributor, Eater Denver: Restaurants and the way we order will go even more digital (to not become obsolete), pervasive farm-driven menus everywhere you look and finally, full-service, flexible menus and service to accommodate common allergies and food sensitivities.

Adam Larkey, contributing photographer, Eater Denver: More focus on how much food gets wasted in restaurants and creative ways to deal with the waste. Big year for Fernet. And cabbage will steal the veggie spotlight from kale and brussel sprouts...

LeVar Battle, contributor, Denver Off The Wagon: Denver: the city you need to get your ass to for fantastic libations, equally good food, drinking, more food, and more drinking..

Jennifer Olson, food photographer and author of Colorado Organic, Cooking Seasonally- Eating Locally : The food scene is moving out of locally sourced as the buzz word and into creating atmosphere and personality. Highlighting not only great food, but also the uniqueness of the space and the personalities of not only the chef, but the front of house staff as well.  Smaller neighborhood spots that are consistently good, not just the place to be for now.

Kris Browning-Blas, food editor, the Denver Post: I expect to see more national and international stories on food production and hunger-fighting efforts; food safety and sourcing within the U.S.; more celebrity chefs extending their brands into travel; and hopefully, the end of truffle oil as we know it.

Heidi McGuire, former Metromix Entertainment Host for 9News and currently the owner of 321 Media Productions: I hope restaurants go crazy with finger food or at least food I can eat with my fingers! What can I say, I really love not only tasting but also touching my food!

Andra Zeppelin, editor, Eater Denver: The return to basics - good quality ingredients prepared with impeccable technique and commitment to great flavor, taste, and texture. I am hoping to see less fuss and Kool-Aid drinking: every time a restaurant gets hyped, diners seem to adopt the hype as their experience instead of actually judging for themselves.

Ruth Tobias, author of The Food Lover's Guide to Denver & Boulder and the Denveater food blog: No predictions, but I can say I'm looking forward to the opening of Old Major, to the possibility (likelihood?) that Ian Kleinman will open a brick-and-mortar, and to keeping tabs on Mark DeNittis.

Penny Parker, columnist at Black Tie Colorado, formerly of the Denver Post: Small plates will continue to be a big trend. I love getting bites of a lot of dishes.

Tucker Shaw, features editor, the Denver Post: I hope it's "The End of Share Plates." But I know I'm swimming against the stream on that one.