Share All sharing options for: 12 Biggest Dining and Food Stories of 2012

The last twelve months were packed for Denver's dining scene - peppered with shock from Matt Selby's departure from Vesta, awe of the unending raves for the Squeaky Bean, joy for better dining options at the airport, and pride from seeing three chefs represent Colorado on the tenth edition of Bravo's Top Chef. Here are the top 12 food and dining stories of 2012, complete with some commentary from Eater's friends who have the pulse of the city.

1. Matt Selby Leaves Vesta after 15 years for Corner House.
In November, chef Selby announced his break from his restaurant group of fifteen years. This week, he will open Corner House. "Learning about Matty's decision to leave his trifecta of beloved concepts to take the helm at Corner House was, at first, a total shock to most people in Denver.  It's hard to comprehend that he'd leave at the seeming height of his success.  But then you think about Matty and his passion for actual in-kitchen cooking - not just concept or menu development but hands on creation of inspired dishes - and it really does make sense," Stefanie Jones of SJPR said.

· Matt Selby on Transitions: From Vesta to Corner House [EDen] 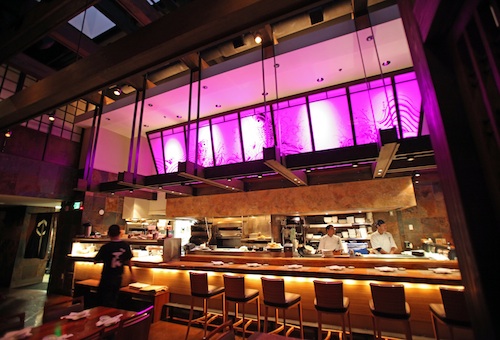 In April, the Den Group, which owns both Sushi Den and Izakaya Den signed the Izakaya Den space over to Pearl Street Grill, an upcoming beer-centric concept. Izakaya will more next door to Sushi Den. "That project will reshape its neighborhood. Toshi is consistently underrated or overlooked --but only by Denver writers (he's widely acclaimed nationally). I think Amanda Faison's piece in 5280 brought a much needed spotlight back to his success, consummate professionalism and what he's done for his Washington Park neighborhood," Frank Bonanno said of the shift.

3. Charlie Palmer Pulls Out of LoDo.

Famed New York City restaurateur Charlie Palmer took over the enormous space that formerly housed Il Fornaio and later Big Game and confidently opened District Meats and Wazee Wood Fire Pizza. Less than a year and a rebrand later, Palmer packed up his knives and left Denver. "What the heck happened?  There was so much confusion about the opening, the name, the hours (were they open for lunch?), the name change, the concept... What should have been a slam dunk for Charlie Palmer and his empire ended up being a huge disappointment.  It was big news when it opened and it was no surprise when it closed," Stefanie Jones commented. 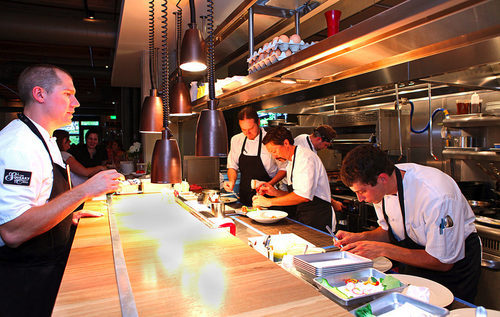 In June, the Squeaky Bean reopened at 15th and Wynkoop after an eighteen month hiatus and a move away from LoHi. The close-knit team led by Johnny Ballen, chef Max MacKissock, barman Sean Kenyon, and maitre d' Stephen Gallic, has reconquered its old fans and made many new ones. The restaurant nearly immediately received a perfect four star review from the Denver Post, Westword's Gretchen Kurtz wrote arguably her most kind and positive words when reviewing the eatery, and in the last days of December, when 5280 Magazine released its January issue, there were three and a half (of four) stars awarded to the Bean. Eater named the Squeaky Bean the Restaurant of the Year in November.

5. Airport Upgrades: RootDown, Elway's and More to Open at DIA.

DIA has worked hard on revamping the dining and entertainment offerings for travelers. The result? Airport passengers can expect to dine at Elway's, Root Down, and Udi's at DIA. Other coming DIA attractions include the Tattered Cover Book Store and ExpresSpa — a spa retail concept. Frank Bonanno said of the DIA changes: "Root Down going into the airport. Come on, how cool is that? That's the kind of risk that makes the Denver airport so great. Someone should do a piece on Mostellar, or any of the guys who make that city-within-a-city work." 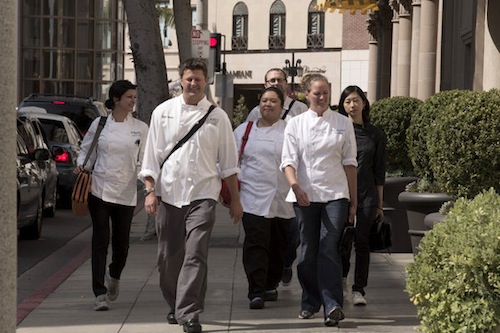 Three Colorado chefs, Tyler Wiard of Elway's Cherry Creek, Jorel Pierce of Euclid Hall, and Eliza Gavin of 221 South Oak in Telluride, were selected and cast on to the tenth edition of Top Chef that was filmed in Seattle. This was a sign of great dining developments in Denver for Leigh Sullivan of LSE: "In the last six years of being in this business (I've been doing this for 24 years in one way or another), I have watched our city become this great big (ok, not so big) mecca of amazingness! One great sign: Top Chef  holding casting calls here and asking three of our own to join their pool of talent!"

7. RiNo, A Magnet For Food Artisans and Restaurants.

The next frontier away from LoDo and Downtown, the River North neighborhood, has proven to be the chosen location for restaurants like the Populist, liquor-makers of all kinds from Black Shirt Brewing to the Infinite Monkey Theorem and Mile High Distillery, and food artisans like Tender Belly Bacon and Ritual Chocolate. Frank Bonanno commented: "The Populist opening in—what's that neighborhood considered? Ball Park? At any rate—a huge risk. I see it as a trend of fancier restaurants slipping into funkier areas. And hopefully being supported there. [...] The Source—there, maybe is where food market innovation can shine." 2013 promises to bring more excitement to this former industrial area with Epic Brewing opening on Walnut & 30th, Oak at Fourteenth and Comida opening in the Source, and chef Troy Guard rumored to be opening more than one restaurant in the area. 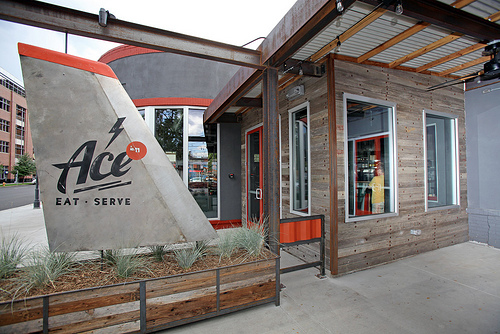 8. The End of Some Iconic Joints and Rise of Entertainment-Based Dining.

On one hand, Denver lost some of its iconic joints - Pagliacci's, a 66 year-old family owned restaurant in North Denver turned off the lights in the summer. Among other notable closures: Longo's Subway Tavern, a 52 year-old pizza joint owned and operated by the Longo family, the Lancer Lounge in Capitol Hill now occupied by Vesper Lounge, and M&D's Cafe, the 34 year-old Whittier neighborhood soul-food eatery. On the other hand, Denver experienced a boom in entertainment-based eateries like Ace and Punch Bowl Social. "While this may sound self-serving, I think 2012 saw Recreational Eating and Drinking make a statement to the dining scene with Ace, Punch Bowl, One-Up , and the View House going into the old Mori space.  Guests are looking for more unique and truly fun options with their dining dollar. They want places that will leave them with a smile on their face," Josh Wolkon of Vesta Dipping Grill, Steuben's, and Ace said.

It was not a good year for Jesse Morreale, owner of El Diablo and Sketch on South Broadway and the now defunct Rockbar, a hipster hangout on East Colfax. Rockbar's demise in October came after the City of Denver denied the joint's liquor license renewal citing serious concerns for the health, safety and welfare of the neighborhood. At El Diablo and Sketch, Morreale is currently on his second round of closures due to the purported unsafe structure and the City's order to vacate the premises. Morreale questioned Tom Downey, Director of the Denver Department of Excise and Licenses and his motivation, but his problems run farther: the company operated by Jesse Morreale that owns the El Diablo/Sketch building has filed for bankruptcy protection and is facing foreclosure on the building. 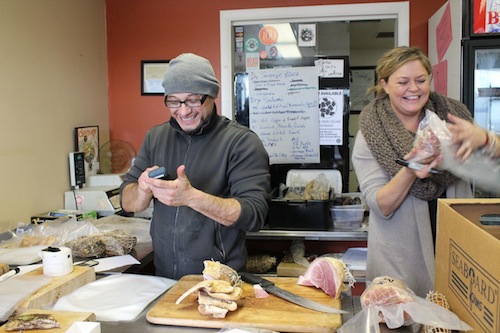 Cured meats fanatics and chefs who loved and featured the IMV products made by Mark DeNittis felt a serious blow when the sausage-making company decided to shut down late November. DeNittis cited harsh USDA regulations and his unwillingness to bend and compromise family recipes to be in compliance. John Imbergamo lamented: "It's tough being an artisan - especially when the USDA is involved. Mark DeNittis and his partners had grown Il Mondo Vecchio into a national player in the world of salumi and sausages. Then the roof fell in when the USDA asked DeNittis to add ingredients and processes to his old world products that they claimed would insure consumer safety – even though there had been no health issues in the three years of IMV production. DeNittis stuck to his artisan guns and refused to budge. The USDA did the same and he closed down IMV in November."

This is not among the juicy, happy, or glamorous stories of 2012; it is plain sad. On October 18, five people were killed inside Fero's Bar & Grill in an attempted robbery. Among the victims, the owner Young Suk Fero, 63, as well as Daria M. Pohl, 22; Kellene Fallon, 45; Ross Richter, 29; and Tereasa Beesley, 45, all of Denver. After the victims were shot, the dive located at 357 S. Colorado Blvd. was set on fire. Fero's Bar shooting shook the dive bar community.

The family behind Pasquini's Pizzeria has been baking more than some of Denver's favorite pies; it has also been cooking up a nasty family feud that has stretched over several years. 2012 was the year when the dispute between big brother Tony Pasquini and his mother Judy on one side, and sister Melinda Pasquini on the other side, reached the peak of drama - an injunction has been sought to stop use of the Pasquini's name, Tony opened Tony P's (instead on another outpost of Pasquini's), and legal fee incurred in the dispute are now upwards of $2 million.