Welcome to The Sugar Files, where Eater uncovers and features the city's best pastry talent. In this first installment, executive pastry chef Christopher Jordan of Edge Restaurant, gets the spotlight. 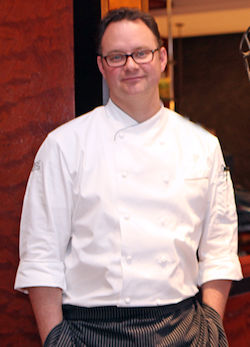 Christopher Jordan, a pastry chef with strong opinions who keeps a low profile, methodically crafts his desserts in the massive kitchen at EDGE, the restaurant in the Four Seasons Hotel. The cooking grounds at the downtown hotel are larger than many Denver restaurants. To execute his part of the culinary program, Jordan has at his disposal countless tools and extensive space - an entire separate chocolate room included. With those tools and his expertise and poise, Jordan may well be the person to bring about change in the pastry culture of the Mile High City.

His education is centered around The Culinary Institute of America in Napa Valley, where he studied pâtisserie under chef Stephen Durfee, a 1998 James Beard Award winner and alum of The French Pastry School. Jordan has now worked for over a decade in the confectionary world, including serving as head pastry chef at the Fairmont Hotel in San Francisco, the Four Seasons in St. Louis, and EDGE in Denver for the last two years.

Your macarons are considered by some to be the best in the city right now. How did you perfect them? I never really got it until last year when I went to France. I went on my own and I ate at probably every pastry shop in Paris- a lot of macarons. When you go to Paris and eat them there, they are a completely different experience than what I had over there. I took what I experienced there and brought back with me. I realized that I was over baking them and that there are certain steps that are very important. Like making the shells and filling them and letting them rest in the fridge for 24 hour. They call it maturation, and I didn't understand how important that was until I saw it done right.

Why is the whole nation so enamored with this little treat? Macarons are fun because they're limitless, and the colors-they are so bright and whatever filling or flavor you want to come up with you can do, I think it's fantastic. Also, people are looking for that next thing. We're such a melting pot as a country and Americans are becoming savvier and traveling more. I think people really like to hold their desserts in their hands. It's like a creme brûlee in that a creme brûlee is just two ingredients-it's custard and it's burnt sugar but it can be bitter, it's sweet, it's crunchy, it's smooth, it's warm, it's cold- a macaron can be a lot like that because the filling can be cool, the outside is room temperature, it's crispy but it's chewy.

What's your approach to pastry? Texture followed by flavor combinations. How can I take a classic and make it my interpretation of something that still translates? At the same time it has to be exciting to eat, it can't be super monotonous, where you get bored and it just doesn't do anything for you after five bites.

Who shaped you as a pastry chef? I love Pierre Herme. He was the first person I really followed. His philosophy is that there are no original recipes, which I firmly believe in. So the job of a modern day pastry chef is to take something and recreate it. My teacher at the CIA, Stephen Durfee, was from the The French Laundry and had that mind set of Thomas Keller about the law of diminishing returns - meaning you eat one bite and it's really good and you eat the second bite and you're like wow there's something different there, but after five or six bites you don't want to eat it anymore. For me, there's nothing more monotonous than eating a huge piece of cake where every bite is the same as the last.

Who and what else inspires you? There are a lot of pastry chefs out there that I look at for inspiration. I read David Lebowitz - I love his blog-his writing is so funny, that very dry sense of humor like David Sedaris. He was a pastry chef at Chez Panisse. I really like eating out a lot. What really inspires me is to look at hot-side food and then look at pastries and see what they are doing. The better the hot side food is, the more it inspires me to push myself harder. I think because I started on the hot side, I still look at it a lot and then I look at platings and I figure out how I can use that in pastry.

What was your first job? Blockbuster video when I was sixteen years old. My first baking job was working at Marie Callender's. I was a pie baker for them and my first Thanksgiving I stood there and baked 5,000 pumpkin pies for two days. It was a crash course on pie baking.

How about your worst job? My first job out of culinary school at this really small restaurant in Napa. I really had no idea what I was doing. You get out with this education and they're like you're a CIA grad you can do it. I got thrown into a pastry chef job at a restaurant and you work very differently. You haven't learned many tricks yet. I had no clue what I was doing. It was hard. It was awful actually.

What is the hardest part of your job? People management. Kitchens just have such a diversity of personalities and I have a very strong personality that can rub people the wrong way. So it's navigating those things. And I mean my staff loves me and they get me but I'm really kind of quirky. I think the interpersonal relationships are my toughest challenge that I work on.

What are your impressions so far with Denver's pastry scene? It's growing. I wouldn't say it's non-existent but it is pretty close to that. It could be a lot better and I wish it were.

What would you like to see more of? Pastry chefs taking challenges with their food and flavors. Recognition for pastry chefs and that comes with them being bold enough to step out of the comfort food realm. Denver is working against that whole cow-town mentality and some of the food I've seen here is so creative but I think a lot of pastry chefs here are just not pushing themselves. It's not like San Francisco or New York where you go out and people talk about pastries and go to a particular restaurant because of the pastries. I think by doing what we do here it's starting, people know that the pastries here are good. I would like to see Denver evolve.

What is your advice for those that are deep in the pastry scene? My advice to both chefs and to owners is realize what a pastry chef can do for you and your business and hire one. If you have one, allow them to do the job you hired them for. Pastry is an art and craft and requires its own mastery. Our average dessert sales are 36-40%. That is incredibly high for restaurant standards and very profitable to the bottom line.

What are your plans for 2013? I get into trouble with our general manager and directors on this. I'm really big on trying to take off our best selling desserts to replace them with something else. I get so bored with...

... Your signature toffee pudding? I hate that, I know it is. I'm always trying to reinvent. Right now I'm thinking to this Spring when we can start changing the menu out. Getting my staff comfortable with doing macarons took a lot of trial and error and now that we have mastered that, I'm looking at how I can push the menu forward and at the same time help them to grow with their techniques. Spring will be a lot of fun. For me personally, practicing chocolate work with sculptures is something that I like to do in my own time, just to keep the practice up.

There are some pastry chefs out there who don't eat much dessert outside of tasting their own at work. Do you usually order dessert when you go out to eat? I always do. I went to New York a month ago, and everywhere I went I probably ordered five or six desserts, and even in Denver. When I go out to eat, I'll order dessert.

Several desserts just for yourself? Yup. One of my favorite comfort desserts is going up to Pizzeria Locale in Boulder. I love that place. You get the saltimbocca and you dip into the budino, and it's just unreal, so comforting. It's butterscotch pudding with this layer of chocolate and they put whipped cream and shaved chocolate over it. The saltimbocca is just pizza dough, hot like a balloon, and they cut it open real fast, and spread the Nutella and it melts, powder sugar it and cut it up, that's it. It's so good.

What is the best dessert you've had in Denver? It was called Strawberry and Rhubarb at Bittersweet, and it was a type of panna cotta with a strawberry and rhubarb compote on top, with a rhubarb sorbet. What really blew me away is that they had taken rhubarb and diced it into this tiny little dice and mixed it in with the strawberry sorbet. It was raw rhubarb which you would never serve that way but it was super crunchy and really tart which played off the strawberries really well, I was really blown away that somebody was willing to take that flavor combination on and do something really bold, to throw raw rhubarb out there and be okay with it, it was executed really well.