Welcome to The Sugar Files, where Eater uncovers and features the city's best pastry talent. In this edition, Jodi Polson of Glaze gets the spotlight. 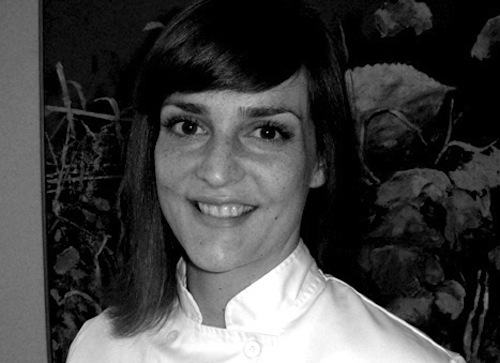 Jodi Polson is the executive pastry chef at Glaze Baum Cake Shoppe. Glaze is Congress Park's temple of baumkucken or Baum cakes as the bakery calls them. These cakes— with origins in Germany and a large following in Japan— are made in a specialty oven nicknamed the Red Dragon, where layer upon layer of batter is roasted on a spit. Glaze's spectacular oven is the only one of it's kind in North America. The resulting cake is comprised of up to twenty layers of an almond flour-based batter, yielding a delicate and balanced confection.

Glaze offers dozens of varieties and flavors of Baum cakes, a rotating line-up of French macarons, and a host of specialty beverages. Offerings include matcha green tea baum, pear baum, pistachio mount baum, and lavender macarons. Polson, a former teacher, decided to make a foray into the pastry world and graduated from the Johnson and Wales pastry program in 2012. After a stint at City Bakery, she joined the opening team of Glaze and in July was promoted to executive pastry chef. Polson talks to Eater about manning the Red Dragon, working clean, and eating ice cream in her down time.

How did you decide to get into pastry? It was something I had just been interested in my whole life. My husband and I were both teachers. He had always been a fan of culinary arts and decided to go back to school and get his degree and now he's an executive chef. That's when I realized it was possible for me to do the same. I think it was a good move because I really love it. It's an art form.

What drew you to working at Glaze? I had a class in pastry school where we learned about baumkuchen. We made something similar— a layered cake that we cooked in a deck oven. I found it interesting that this type of cake was in Denver because I knew it wasn't popular here at all. I was interested in what they were doing and just wanted to check it out. I liked what Heather Alcott, our owner, was saying.

What is the best part about your job? Being able to be a part of something so unique and to have a skill that's so specific. There are only about five people in this country certified to bake on an oven like this. No bake is exactly the same, for certain cakes you have to use different tools on a particular layer. It changes every time because the batters are not always the same temperature, the weather affects the cake as well. You have to be intuitive based on how the cake is looking and what you need to do to change things. Also, being a part of a team. It's not just one person from start to finish. It has to be a group of people working on this or it wouldn't be possible.

What is the most challenging thing about your job? Losing the cakes. There are recipes that we've tried to alter to make new flavors and a lot of times they will not work for unknown reasons. It's a unique cake with unique problems, and that's difficult to fix.

Where do you find inspiration for your pastry? In the kitchen we bounce a lot of ideas off of each other. We all have a passion for pastry. When we go out to eat and try something new, or we look through a magazine and we have an idea, we are able to test it in the kitchen. Our boss lets us test new flavors when we like to. I think my art background does come into play in how I design my pastry. And just everywhere, you see things like a shape or a color and say, hey that would work in a cake.

What is you're favorite place for dessert in Denver? I love ice cream. I really like Little Man, I think they have some terrific stuff. I tend to get desserts at Mexican restaurants. Lola did an orange-epazote ice cream that I thought was awesome.

Have you been making macarons since Glaze opened? We initially started making French macarons in our owner's kitchen before the shop opened and the oven was finalized. We experimented with different recipes and flavors to see what might work in the shop. Our macarons have grown in popularity and we were awarded 5280's best lemon macaron this past summer.

What new recipes are you working on? We're doing a pumpkin mount baum with a maple glaze. With Christmas coming up we are going to be experimenting with more peppermint and spearmint flavors. We are playing around with a cornbread flavor so we will see if that comes into fruition. We are experimenting more with the savory side of French macarons, too. We've started doing maple-bacon, and we partnered with Tender Belly bacon for that.

Advice to aspiring pastry chefs? Work clean and stay organized. A dirty work station leads to sloppy product. My biggest pet peeve is a dirty work station. Also, be patient. You can't learn everything at once, but you can try your best to soak it all in. Ask questions, ask for feedback, and don't be afraid to fail. Everyone has made some pretty terrible products at some point or another.