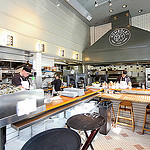 On Tuesday October 15, the newly opened Humboldt Farm. Fish. Wine restaurant, located at 1700 Humboldt Street in the former Strings space, hosted a fundraiser for the Colorado Flood Relief and the American Red Cross. More than $1100 were raised and the guests who attended had a chance to preview several items from the menu as passed appetizers alongside beer, wine and a specialty cocktail. [Eaterwire]