Share All sharing options for: The Lowry Neighborhood Will Get Four New Restaurants in Its Own "Dining District"


Symbolic dirt was thrown about yesterday by Denver's Mayor Michael B. Hancock and the development partnership behind the upcoming "Lowry Dining District." The groundbreaking ceremony signaled the start of a mixed use development created by Larimer Associates and Hartman-Ely Investments that promises to include four new restaurants.

The first of these is Café Mercato, an Italian eatery by chef Giancarlo Macchiarella, who also owns Locanda del Borgo. Macchiarella's plan for Lowry is to create a modern, warm and casual neighborhood destination which will feature shareable Italian dishes and an expansive wine "library." The plan is to be open for lunch, dinner, and weekend brunch in the fall of next year. 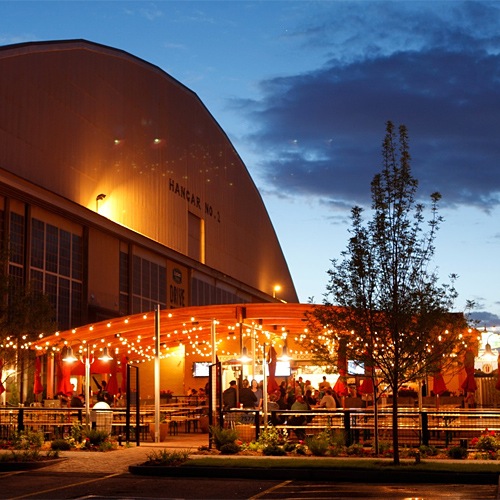 The development, named Hangar 2, is a collaboration between Larimer Associates and Hartman-Ely Investments. This self-described dining district was designed by Semple Brown Design and is being built by Rand Construction. Already part of the transformation of the area is the restored 90-foot-tall Air Force Hangar where new retail and office spaces, house Extra Space Storage at Lowry, Qi Yoga & Spin, Base Fitness, Laughing Latte, Lowry Beer Garden, Montessori International and several private businesses.

There is no doubt that the Lowry area needs more independent, modern dining options. While unlikely to become a dining destination, once completed, it can offer the family-heavy neighborhood a good meal without a long drive. City Set, a restaurant-driven project that opened in Glendale earlier this summer where eateries like Jax and Udi's are busy day after day, shows the great potential for such a development.