Share All sharing options for: Bootstrap Brewing Company: Playing Lullabies for Their Craft Ales and Lagers

Welcome back to A Pint With, where Eater uncovers and features the city's most interesting beer-brewing talent. In this edition Steve Kaczeus, the owner and brewer at Bootstrap Brewing, gets the spotlight. 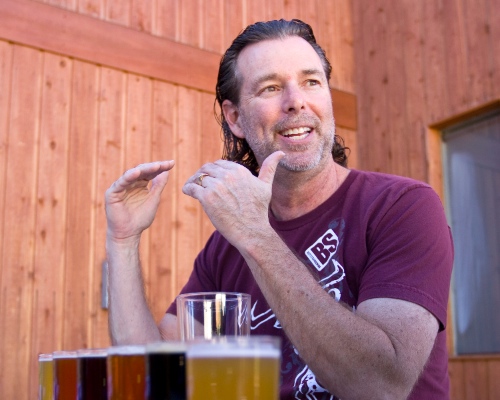 "We decided it was either open a brewery or move to the Caribbean, says Steve Kaczeus, laughing, "we realize now what our mistake was— not opening the brewery in the Caribbean." Despite the appeal of a beachside brewery, Bootstrap accomplishes something that's hard to achieve on vacation— the neighborhood feel. Husband and wife duo Steve and Leslie Kaczeus created a place that felt like home; they painted the brewery the same colors as their living room. Located in Niwot, where their kids have grown up, Bootstrap sits along the town bike trail. It's the perfect place to post up after a long ride.

Steve and Leslie Kaczeus of Bootstrap Brewing first realized their love of beer when Leslie bought Steve a homebrewing kit in the late 90's. Over the years, they made friends like Eric Wallace of Left Hand Brewing and Dale Katechis of Oskar Blues, who would go on to be their mentors as they planned their new business.

Also during the planning stages, Steve joined American Brewers Guild and took a seven-month brewing program. He followed that up with an internship at the Hoppy Brewing Company in Sacramento, California. In total, he spent five years planning for and educating himself about work in the beer industry.

When the Kaczeus' found their building on 79th Street (formerly home to many businesses including a plumbing supply company, sidewalk chalk factory, furniture restoration, auction house, and a Crossfit gym), they were thrilled about its high ceilings— not only were they tall enough to house fermentation tanks, but also they would make for some great acoustics. Each beer at Bootstrap has a set play list. When they brew the Flagstaff Amber, for example, they listen to songs like "Play Me Some Mountain Music," "Rocky Mountain Way," and "Fire on the Mountain."

After Bootstrap's opening in June of 2013, it didn't take long for restaurants to start requesting kegs. The strong fan following they have developed has started to favor certain beers such as the Insane Rush IPA. Bootstrap has also converted non-beer drinkers with their 1956 Golden Ale, which is aged in Merlot Hungarian oak barrel, great for wine aficionados.

Steve has also brewed a Backfire Chili, a golden ale infused with chilis. They also have season beers like the Pumpkin Brown Ale brewed with fresh local pumpkins. Look for the Gingerbread Ale on tap soon, brewed to the song "Its Beginning to Look a Lot Like Christmas."