Courtney Wilson, one of Denver's favorite bartenders, packed up her bar tools and moved back to Williams & Graham. Wilson was the bar manager at Old Major, a position she shared with Ryan Conklin from February until August, when the certified cicerone and bartender departed. Why she left? "I was not happy and the ownership was making changes to the bar program that I was just not going to agree with," she explained. The bartender now splits her time between working with Sean Kenyon at the LoHi speakeasy and working at Steuben's.

Along with Wilson, as though the two were a package deal, sommelier Bruce Conklin departed as well. The wine wiz received high praises on a couple of occasions from 5280 Magazine's restaurant critic Stacey Brugeman for his knowledge of sherry and impeccable wine service. He is now at the Proper Pour, a boutique bottle shop owned by Mclain Hedges and Mary Wright (she was on the opening team at Old Major).

"Working with Justin and being part of opening Old Major was a great experience," the sommelier explained. "We came to realize we wanted different things. Being given the chance to help Mary and Mclain open the Proper Pour was an amazing opportunity and we are all excited about what it will become," he added. 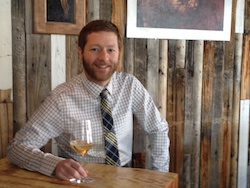 While Wilson and Conklin departed, the restaurant continues to gather accolades, including being named among the 33 best new restaurants in the United States by Thrillist last week. The LoHi restaurant named Ryan Ravenscroft as its new beverage director. The Certified Level II Sommelier has been at the restaurant since April 1. Prior to this, among others, he served as wine director at TAG.

The cocktail program will be a group effort between all of the bartenders and the restaurant assures that the quality of products will not change. As for the beer list, one that was stellar at the opening at Old Major, the word is that the "blueprint that Ryan [Conklin] left has pretty much stayed consistent as far as style but the producers are different." Kevin Deming, a bartender that previously worked at Euclid Hall, is now heading up the beer program.