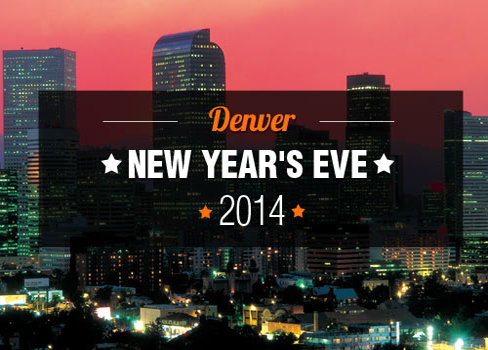 It's that time of year again—the time when party-goers scramble to make plans for New Year's Eve. No one wants to be left out in the cold, especially not in a place like Colorado. New Year's Eve has to be done right—where you are, who you are with, and what you are doing sets the tone for the upcoming year.

Colorado already has world-renowned skiing, a vibrant population, and a buzzing state capital. And now it rivals neighboring cities' end-of-year festivities with a host of parties taking place on New Year's Eve. As the clock strikes midnight, raise your glass and feel good about 2014.

1. NYE BLOCK PARTY 2014
Where: Crowne Plaza Hotel
When: 9 p.m. -
Who: 21+ Big Time Partiers
Why: It's the largest hotel takeover in Denver, it was named hottest party on the clubzone.com list last year, and will definitely sell out. For the New Year's Eve of your life, grab a ticket to this blow-out bash featuring futuristic entertainers, Colorado's best DJs, special appearances by celebrities and professional athletes, laser tag, a photo booth, and an exclusive VIP area. You don't want to miss shouting your midnight countdown at this incredible celebration.
2. 12TH ANNUAL WHITE ROSE GALA
Where: Hyatt - Denver Tech Center
When: 9 p.m. -
Who: 21+ Gatsby-esque Philanthropists
Why: Deck yourself in sequins or a fedora and join in this beautiful throwback New Year's Eve celebration in support of the Women's Global Empowerment Fund, which has sold out every year for past 11 years. Be one of the 3,000 beautiful guests watching the 40+ performers and celebrating under the 10-story balloon drop at midnight and remember why this is the best party night of the year.
3. DENVER NEW YEARS EVE BLACK TIE PARTY
Where: Sherman Events Center
When: 8 p.m. - 2 a.m.
Who: 21+ Swanky Sippers
Why: Party in style at Denver Landmark. Don your best tux and gown for an amazing New Year's Eve celebration as guests dance to live music upstairs in the Vliggio Theater, groove to multiple DJs, and try your luck at a Vegas-style casino in the Grand Ballroom. As an added bonus, VIP tickets are privy to an open bar.

4. CHANCES 2014 HIP-HOP NEW YEARS
Where: Chances Nightclub
When: 8 p.m. -
Who: 21+ Hip- Hop Hotties
Why: Three DJs, three floors, and hip-hop madness. Kiss 2013 goodbye on the dance floor or at your private table with bottle service. Denver's best hip-hop club is the best place to put-off making those resolutions until the next day.
5. THREE-IN-ONE-ALL-ACCESS-NYE
Where: The Drink, Tryst Lounge, and LaMark15
When: 7 p.m. -
Who: 21+ Party Hoppers
Why: Who needs to stay at one place on New Year's Eve? Head to LoDo this NYE for non-stop madness as you celebrate in three clubs. No need to leave one to get into the other, as they'll all be connected. Munch on a buffet, dance to two of Denver's best DJs, and raise your glass of complimentary bubbly. Don't believe there is only one place to ring in 2014—there are three.
6. DENVER'S GRANDEST NEW YEARS EVE PARTY
Where: Grand Hyatt Denver
When: 8 p.m. - 1 a.m.
Who: 21+ Elegant All-Nighters
Why: It's all-inclusive and elegant—the best of combinations. For a night of decadence and fun, the 'Grandest' NYE party is the place to be. Housed in the luxury hotel in downtown Denver, this party boasts unlimited premium pours at the open bar, a dinner buffet, and four entertainment areas to ring in the new year right. Splurge for the VIP entrance for a Gatsby style affair with a 10-piece band and sit-down dinner. Pure glamour.

7. DECADENCE
Where: Colorado Convention Center
When: 7 p.m. - 2 a.m.
Who: 18+ Raucous Groupies
Why: Above and Beyond and Pretty Lights are headlining. See two amazing electronica dance music groups under the same roof. Above and Beyond is the hottest UK group in the dance scene right now and Pretty Lights—a group that effortlessly mixes hip-hop, funk, and electronica—is already a mainstay on festival circuits. Start your 2014 off in a spectacular manner by joining these two giants of electronica music at midnight.

8. NEW YEARS EVE FT WIL ANDERSON
Where: Comedy Works South
When: 8 p.m. -
Who: All aged fun-loving laughers
Why: Ring in the New Year with laughter. For an alternative to the club or hotel scene on New Year's Eve, join Denver's funniest crowd. Wil Anderson—an award-winning stand-up comedian, TV host, writer and podcaster from Australia—will be infusing the celebration with laughs. And if you'd rather start your night later, head to the party at 10 p.m. for a champagne toast and party favors at midnight.

9. 2014 NYE RED CARPET EVENT
Where: Ultra Sheer Nightclub
When: 10 p.m. - 2 a.m.
Who: 21+ Hollywood Glamsters
Why: Work the red carpet. For a night filled with Hollywood style, Ultra Sheer Nightclub will be putting on a New Year's Eve celebration fit for the stars. Get ready for your close-up in front of the steps lined with paparazzi ready to capture your look. Strut your stuff then splurge for a bottle service package named for the star-style they represent.
10. BEARRACUDA DENVER NYE
Where: Tracks Nightclub
When: 10 p.m. - 2 a.m.
Who: 21+ Out and About Party Animals
Why: It's the most talked about GLBT New Year's Eve celebration in Denver. Join friends and lovers for a party unlike any other. Back in town and revving up for their biggest night ever, Barracuda is flying in two DJs from San Francisco to play music all night long. Hundreds of guests will be in attendance partying like there is no tomorrow. Don't miss out.