Welcome back to A Pint With, where Eater uncovers and features the most interesting beer-brewing talent. This time around Sanitas Brewing in Boulder gets the spotlight. 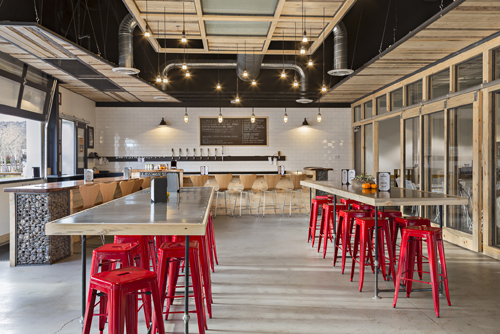 Chris Coyne and Michael Memsic brewed for Boulder Beer before they decided to open Sanitas Brewing with their third business partner Zach Nichols. One late night while they brewed imperial stout, a huge owl flew into the open garage door at the brewery. Later when Coyne, Memsis, and Nichols would meet to plan the execution of Sanitas, they saw owls left and right. "We probably saw 20 owls throughout the process of opening the brewery," says Nichols. So naturally, the trio put an owl on their logo. 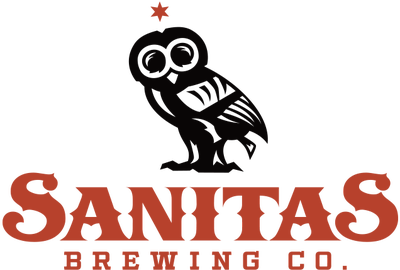 Also on the Sanitas logo is a 6-point star, a historical beer icon used during pre-Prohibition to signify beers that had been made with the six adjuncts of beer— the brewer, barley, grain, hops, water, and yeast— and nothing more. Translated in Latin, "Sanitas" also means wholesome, clean, and sanitary. Between the owl, the star, and the name itself, there is a whole lot loaded into Sanitas' logo.

That philosophy also dictates the ingredients that go into Sanitas beers, the majority of which are completely organic. 90 percent of the malts used are organic, as are all of Sanitas' hops. "We don't promote ourselves as organic," says Nichols. "It's just the right thing to do."

The owners at Sanitas also thought the right thing to do when opening the brewery would be to honor their home in Boulder, and the people who live there. "Let me show you," says Nichols. "That peak over there [that our patio overlooks] is Mt. Sanitas. It's always busy. It's a local landmark. We want to be a local landmark."

And so, despite its oh-so-appropritate Latin translation, Sanitas is actually named after the beloved Mt. Sanitas, a nod to the nearby hiking that all of the brewery's owners enjoy so much. "One of the things that creates community here is the outdoors. That's why people choose to be in Boulder."

For most of the year, Boulderites can choose to be outdoors at Sanitas' taproom, where a huge patio overlooks not only Mt. Sanitas, but also a massive yard where guests can play a variety of yard games. The best part about the patio: a permanent taco truck run by the local McDevitt Taco Supply.

The outdoors meet indoors in Sanitas taproom, where guests can enjoy their flagship black IPA or saison at the walnut bar reclaimed from a barn in Pennsylvania, and enjoy the design elements created by beetle-kill wood. "The logo [with its clean lines and use of white space] fits the feel in here— it's contemporary meets industrial. The beer is the most important thing."

In choosing clean design for its taproom and marketing, Sanitas is accomplishing the owners' goals of focusing completely on the beer, which comes in three different levels. The first are the flagships, notably the saison that is the first canned saison from a Colorado brewery. The second level is called the Navigational Series and includes big, experimental beers like imperial stouts and double IPAs. Finally, the third level of Sanitas beer is called the Parliament Series. "A parliament is a flock of owls, which is highly rare," Nichols explains. "We have about ten or so barrels currently housing varying wild beers." These beers will be released in a matter of months.

Also coming soon is a specialty stout series from Sanitas. In the meantime, guests can enjoy the winter saison, a malty saison brewed with rye and spiced with organic nutmeg and vanilla beans.

Editor markup for SANITAS. This is only visible in the story editor.