The Troy Guard empire is expanding more today as Los Chingones, the chef's modern Mexican restaurant, opens its doors in RiNo. From a large two-story space that includes a 90 seat patio, Los Chingones will start serving Guard's interpretation of Mexican food along with a quirky cocktail program and more.

The space was designed by Melissa Friday of Xan Creative whose portfolio includes, among others, the new Atomic Cowboy and Denver Biscuit Company on South Broadway as well Uptown's ACE.

Guard worked with Melissa Friday to find an artist to do a mural in the space. Originally, the restaurateur wanted an urban graffiti-like wall, but as they began to work with Yatika Starr Fields, they settled on a piece that incorporates some Mexican themes: Dia de los Muertes roses, cactuses, gold and silver leaes, and more.
Extending on the entry wall to the left of the stairs, the mural connects the upstairs and the downstairs spaces seamlessly. All the wood in the restaurant, stairs and countertops included, was crafted by local design-build firm Tres Birds with reclaimed materials sourced from the neighborhood.

Editor markup for Los Chingones . This is only visible in the story editor.

The food at Los Chingones draws on traditional Mexican dishes, but adds modern twists and new items. The dinner menu has a small salsas section that includes six options. Every salsa has its own personality- and the six combined seem have the range of a well-composed beer flight: there is something for every palate from the smoky sweet pasilla to tomatillo and the balsamic tomato. Small plates are divided between hot and cold with the obligatory guacamoles, tostadas, quesadillas, and enchiladas gracing the menu.

Guard tapped into his Hawaiian cooking roots to create dishes like the hibiscus kampachi crudo. The chef steeped hibiscus in lime, chilled it down and mixed it with lime and agave to create the sauce for the fish that gets topped with avocado and Serrano peppers as well as micro cilantro. If you order the garden guac, don't be surprised to find zucchini in it- yes, zucchini. "I wanted it to be fresh and have some texture," said Guard of the unique combination.

The taco section includes eleven options ranging, once again, from interpretations of classics like the pork shoulder, beef tongue, and lamb neck, to more unique combinations like the butternut squash. All tacos are priced the same, making choices more about the options in front of them than the price differences. 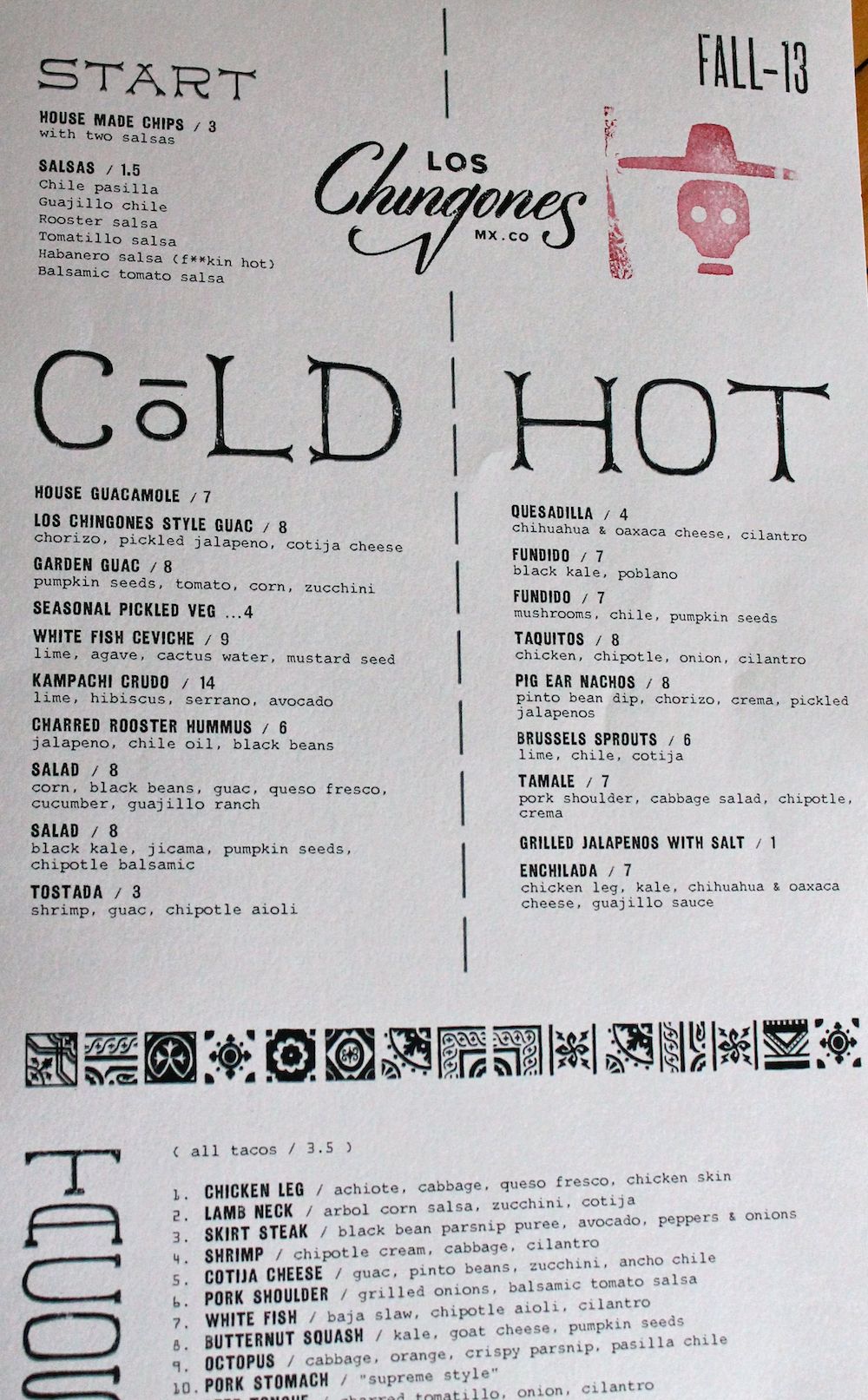 Everyone who arrives gets a free plate of chips and the house "Rooster" salsa. "The newer "hip" modern Mexican places always charge for chips and salsa," says Guard. We thought we would just offer them to guests. If they want to order more, they can for $3 -- with a choice of two salsas," he adds.

The drink menu, curated by Nikki Guard, includes twelve mixed drinks from traditional Margaritas to the claimed-to-be aphrodisiac Panther Milk Shot that combines Pisco and citrus with "ceviche essence." Sombra Mezcal can be substituted in any of the tequila drinks for an additional $3. And fear not, if you're looking for a non-alcoholic option, the well-trained bar staff can find just the right combination for you. 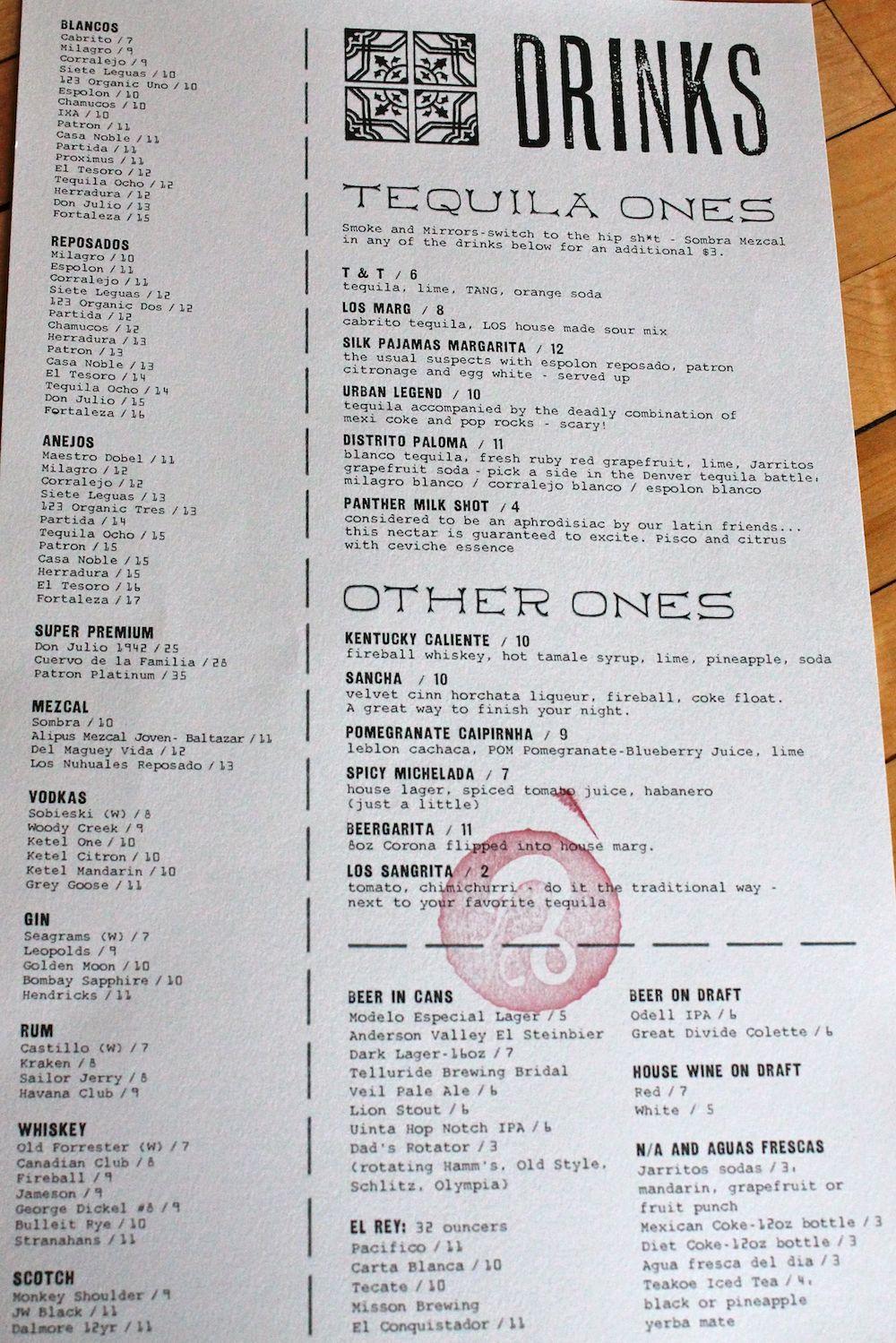 Lunch will be served beginning in January, with brunch coming up in April. The rooftop patio, a sprawling space with a great view of the downtown skyline, will open on St. Patrick's Day. Los Chingones is officially open today at 4 p.m. with happy hour specials, including $2 tacos, taquitos and tostadas running until 6 p.m. Dinner is served until 10 p.m.