Share All sharing options for: Marcel Templet of the Capital Grille Talks About Connecting With Guests and More

Welcome to Lifers, a feature in which Eater interviews the men and women who have worked in the restaurant and bar industry for the better part of their lives. Here they share their stories. 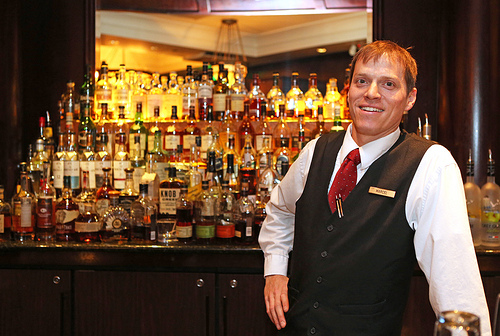 Marcel Templet of the Capital Grille has been meeting customers from behind the bar of the Larimer Square restaurant since 2004. His name is what you'll hear if you ask some of Denver's experienced industry professionals about who they like to share a drink with when they go out. Templet's hospitality style transcends trends and fads- he is the quintessential bartender- one who welcomes you, shakes your hand, and asks you about your day. Somewhere along the conversation he'll strike, your drink will be right in front of you. It's no surprise customers call to see if he is there and seek his company and no wonder peers look up to him as a role model. Eater talked to Templet about how he started his bartending career and more.

How did you come to work at a Capital Grille? I moved to Denver in 2004 with my wife. I was at the Capital Grille in Kansas City and was a part time bartender there. Then it just happened. I had this restaurant job that turned into me having this career and it's been 10 years. It has been an amazing place to work. Capital Grille prides itself on using good ingredients and doing a good job. It has been a learning experience because people think that corporations don't care about anything, but Capital Grille does.

Tell me the story of how you started bartending. I, like so many kids, left college early. I spent a lot of money and didn't really give a shit. I went to school at Texas A & M University and it was a great place but I was an engineering major and I was falling asleep in every class. I started waiting tables back in New Orleans and it was fun because I'm into the performance aspect. I like to put on a show for people. I then slipped into a bartending job on Decatur Street at Landry's Seafood and was pulling frozen daiquiris.

It was at that bar that I realized the space between the person and me at the bar was completely transparent. It was this great place where I could get to know people. I also fell in love with the fact that when people sit down at the bar you and the customer are on the same level. So often when you wait tables you are the person with white gloves standing aside. I work with a ton of professionals that demand respect from everybody and I just never felt like I could demand respect so it wasn't really that good of a job in the end for me.

When did you decide bar tending was something that could be your career? I think I really turned into a bartender in Lawrence, Kansas as this restaurant called Tellers, which was an old bank building in a university town. At this bar, you have the students doing shots and then the college professors. I had this great span of guests that I could just pick up stories from. I really appreciated seeing people's lives. You can pick any individual point out of my development and say this is when it happened. It is like riding a bike. You can't pay too much attention to it because if you look down you will fall over. My career did just kind of manifest itself out of what I was doing. I love the history of spirits. In engineering, they would throw math and science at us and it would just go straight through my head, but as soon as I was given a crash course on wines of the world at a restaurant, that information stuck.

How has bartending at Capital Grille pushed you to become the best bartender you can be? It's a really fun time to be bartending anywhere in Denver right now. Capital Grille really has been the place that I've turned into who I am today. I didn't really bring much to the table when I started there, but they helped me and I helped them. After I took Bar Smarts in 2009, I came back and threw out all the sour mixes out. Now we do all fresh squeezed juices.

Ten years at one restaurant is a long time in this industry: why have you stayed? Maybe because the managers have all been there since day one. More than a handful of people have all grown up together there. Lisa, for example, who I work with Wednesday through Saturday, we've worked together for almost seven years. That is longer than most marriages. She is a wonderful person to work with. One of my favorite things is the people I work with and people see that when they come in. You can always tell when you walk into a restaurant and you see that the people that work there don't like each other, you don't want to be there. I think people just gravitate towards that. We have a great group of regulars. They're just an extension of our family.

What's a story that comes to mind about one of the regulars?So many, but one that comes to mind is kind of sappy. My regulars keep me in check and it's a two way street. We remind each other to do things in our life that count. I had a second baby and I was just kind of in the throws of bringing up kinds and one of the regulars said, "Congratulations on the new kid!" "What are you going to get your wife?" I responded with, "What do you mean what am I going to get my wife?" The regular said, "A baby gift? "You got to get her something she carried your child for nine months." He totally knocked the sense into me. It was like an uncle who was like hey buddy don't forget to be a good human.

What is your favorite drink?Gosh, my next one. After a long day at work I like a beer and a shot. If I am going to sit down and enjoy something I am going to go for a whiskey based cocktail. The Old Fashioned is a great drink, but between the Vieux Carre and the Old Fashioned, it is just whiskey. So, I have to say --whiskey. There are so many to choose from. I don't like to play favorites. I've been known to drink anything on the rocks or straight up.

Any plans to change things up and leave Capital Grille? I really enjoy my time here. I feel like I've kind of become who I am here. It used to be when you said you were a bartender the image was you were at a college bar pulling draft beers. Now people appreciate it and you can be really proud of it. With all the industry friends I have in this town we have all been able to not take each other too seriously. I have been able to be in the right place in this great cocktail town.

Templet is a favorite with a lot of local bartenders. Eater asked Sean Kenyon of Williams & Graham to share some thoughts on the Capital Grille bartender.

What are your thoughts on Marcel Templet? Marcel is my favorite Denver bartender that I have never worked with. A smile is his default expression. He's as genuine a bartender as he is a man. Marcel is a real bartender; no ego, no pretense. When you sit at his bar it is all about you. That's exactly how it should be.

How did you meet him? Marcel and his beautiful wife Jenny were regulars at my bar for years when I was at Steuben's. Marcel would get off of work and call in two orders of meatloaf before the kitchen closed. Then they would stay for awhile and we'd talk, laugh ...and have a couple of shots.

How has Marcel impressed you as a bartender? I was sitting at Marcel's bar at Capital Grille one night. It was really busy and the bar patrons were doing pretty much everything rude to get the bartenders' attention. It was cringe-worthy. They were snapping fingers, clapping on the bar, holding out credit cards. Marcel and his fellow bartender were sort of in the weeds, but the smile never left Marcel's face. He never looked flustered or bothered nor did he break a sweat. He took care of everyone and the guest left the bar happy, no matter how impatient they had been. I was very impressed with his composure and hoped that I was that calm under pressure.