On Monday, December 9, Patxi's Pizza, a San Francisco-based restaurant group specializing in authentic Chicago- and Italian-style pizza, will open its third Denver location in Uptown. Next door to Olive & Finch, a European-style café from chef Mary Nguyen opened today, the new Patxi's (a name of Basque origin, pronounced PAH-cheese. 't' before 'x'), is housed in a newly constructed mixed-use building. Owners Bill Freeman and Patxi Azpiroz aimed to create a space that is rustic yet contemporary, in line with the other eleven locations of the pie eatery but unique in its own right.

The business duo branched out of San Francisco and into Denver because of their love for the outdoors. "We like the outdoors and after opening few restaurants in the Bay Area, we wanted to open in a place where we wanted to be. And Bill's wife went to Boulder, so he was familiar with it." Uptown was chosen by the restaurant as a third location in Denver as it reminds the owners of San Francisco's Hayes Valley. "It has an artsy feel and it is a little more gritty, similar to the Hayes Valley," Patxi explained.

The large room on Seventeenth Avenue is cozy and inviting with design elements that catch the eye. Big Ass Fans on the ceiling? Check. Garage doors to separate the bar and patio? Check. There are industrial-style chrome lighting fixtures that light the space, reclaimed wood around the walls with strips of mirror making the space seem bigger, and dining tables crafted from bowling lane wood salvaged from the Holiday Bowl in Hayward, California, a joint built in 1958.

Editor markup for PATXI'S. This is only visible in the story editor.

"The design in this new location is an evolution. Every restaurant is a little different. We started using reclaimed materials like the recycled bowling alley we used for the tables. We just want the guests to be happy, be comfortable, and relax," Patxi Azpiroz explained. "Ideally, when you come in here you should be able to leave teh rush and bustle aside- if they want to do that. Some people never want to do that and that is ok too," he added.

There seems to be some form of a seating arrangement for every type of group: there are booths and tables seating up to 80 guests, an indoor bar that can fit 12 people, and a community 10-top table that can double as a private party spot. There is also 10-seat outdoor bar as well as the 44-seat patio complete with a hand-fabricated, custom steel canopy, lights and heaters to allow dining outside even when the weather does not fully cooperate.

Here, and at all Patxi's locations, the pizza eatery creates authentic Chicago- and Italian-style pizza, featuring two distinct, handcrafted styles of dough, four types of mozzarella and over 30 different fresh meat and veggie toppings. The most popular item at Patxi's remains their flagship Chicago-style Stuffed Pizza: a deep dish pizza with a layer of crust on the bottom, followed by toppings and cheese, all covered by another thin layer of dough, and topped with homemade sauce. 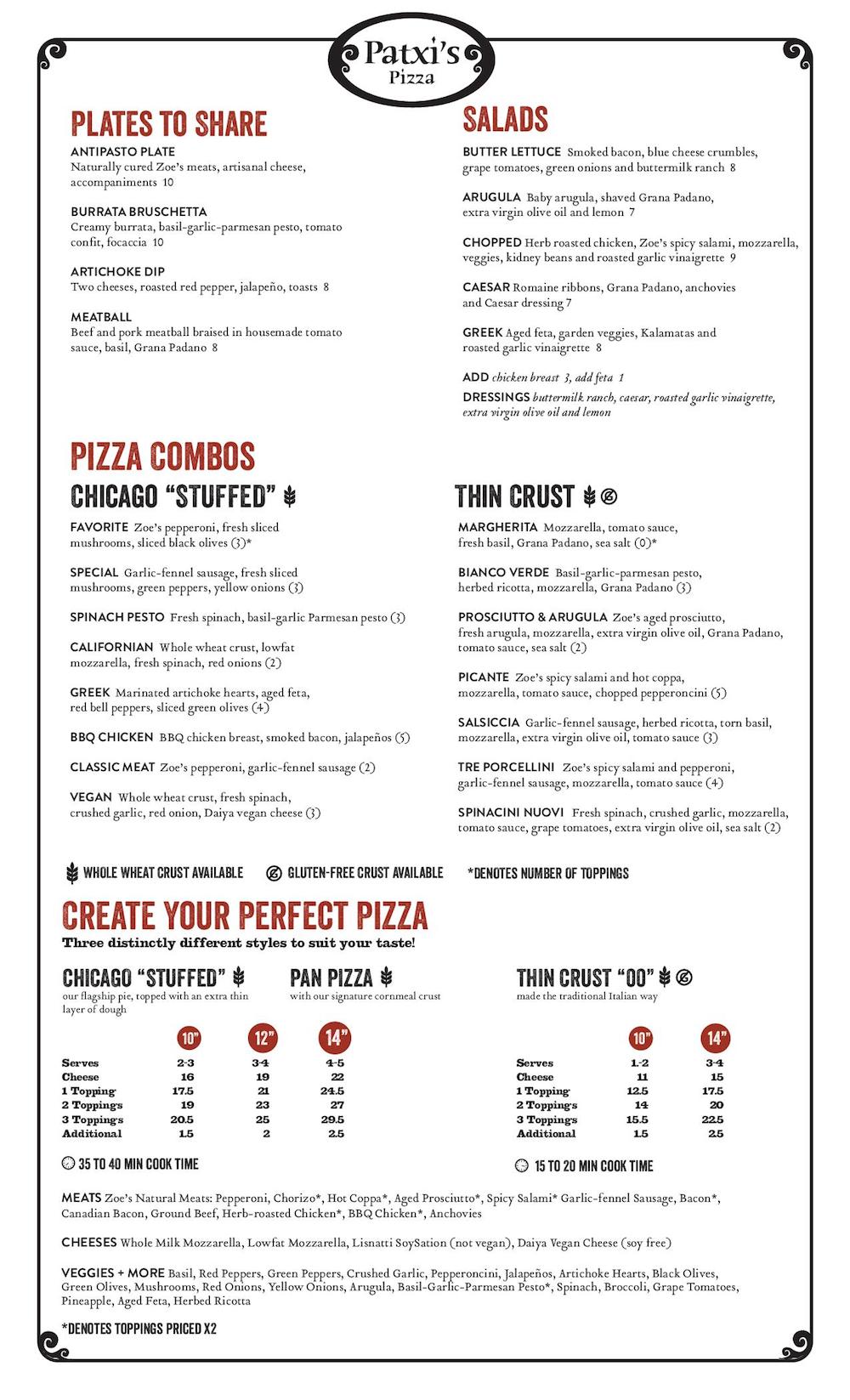 But there is much more than that on the menu, including, of course a thin crust pizza, made with '00' flour that can be made with four styles of mozzarella and over 30 different meat and veggie toppings. To make all guests comfortable and accommodate any dietary restriction, Patxi's offers vegan cheese and crust, and gluten free crust options. In addition to pizza, Patxi's features an array of small plates great for sharing and, in lieu of dessert, Patxi's offers honey for the "bones" or crust of the pizza. 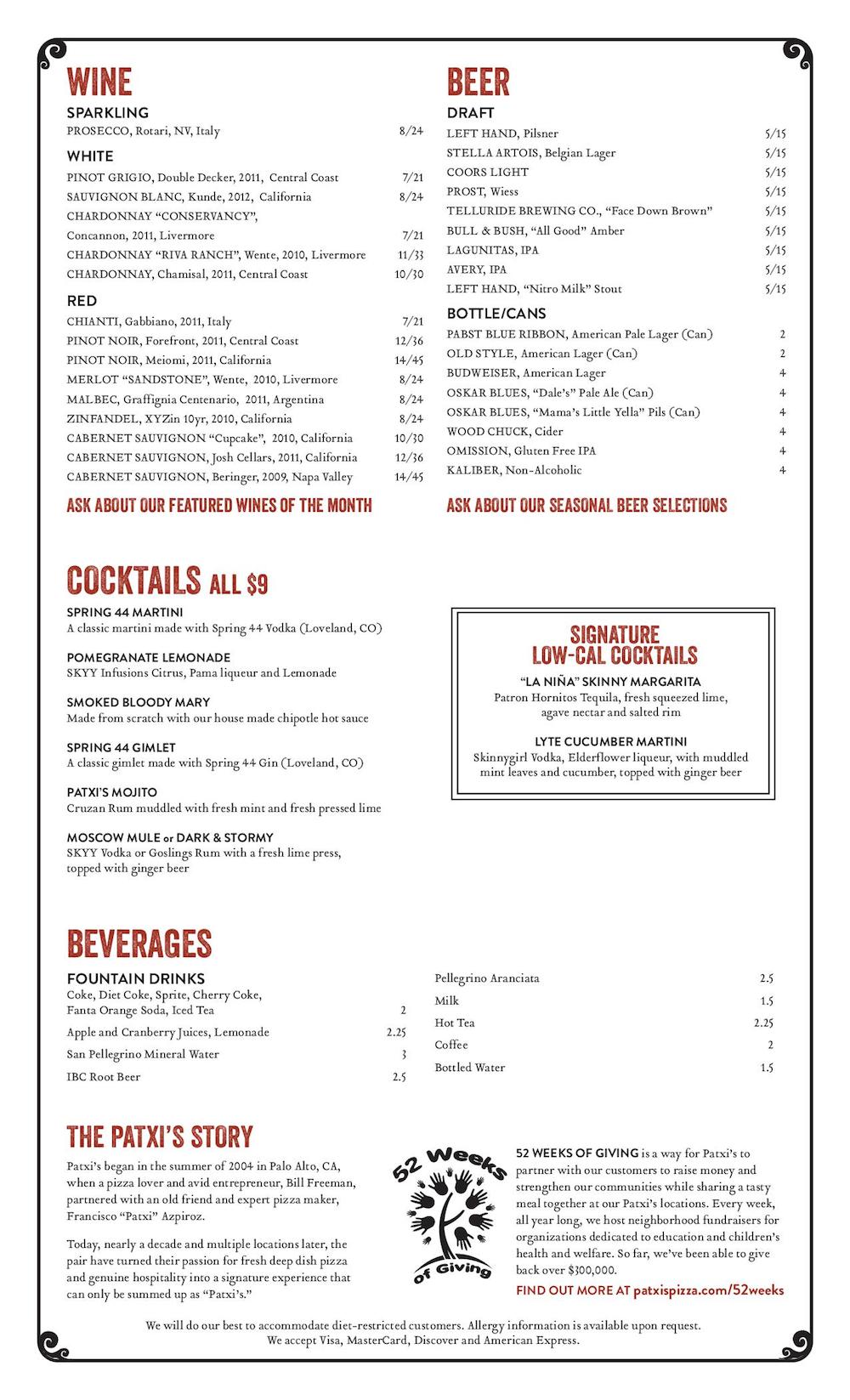 There is, of course, including a full bar. The Uptown location features 12 beers on taps, the most of any Patxi's location, including local favorites like the Pilsner and Nitro Milk Stout from Left Hand Brewing, the Wiess from Prost, and Avery's IPA.

Patxi's Pizza Uptown offers takeout, as well as delivery of all menu items. Will there be more locations? There may be a Boulder outpost in the future.

· These Are The Ten Events You Should Not Miss in December [EDen]
· Updating The Eater Heatmap, December 2013 [EDen]