Who Is Denver's Hottest Chef: Poll #1

Share All sharing options for: Who Is Denver's Hottest Chef: Poll #1 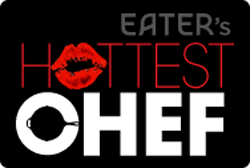 Sure it is only 28 degrees out in Denver with a chance of snow around noon, but Valentine's Day at Eater will be HOT. Today is officially declared Hot Chef Day and, beginning right NOW, Denver will have its second annual turn at voting for the hottest man or woman behind a stove.

Unlike last year, when voting was spread over the course of a week, this year's competition will take place over one, voting-packed day. 26 reader-nominated chefs will battle it out for the coveted title through five polls that will be unveiled every 45 minutes until noon. All five polls will be open until 2:45 p.m. Starting at 3 p.m. the winners of all the morning polls will face off in a final round. This final round poll will close at 6 p.m., and its winner will be crowned the Hottest Chef in the Mile High City.

There is national glory at stake too. The Denver winner will then battle it out with the hot chefs from all of the other Eater cities for the title of Hottest Chef in America. Make your votes count.