Denver Off The Wagon Turns Two and Parties

Share All sharing options for: Denver Off The Wagon Turns Two and Parties

Next weekend, Denver Off The Wagon, the popular local blog focused on booze, marks its second anniversary. To celebrate, the DOTW crew is dedicating a day to each of the following: wine, beer, and spirits.

The festivities will kick off on Thursday, February 21 with a six course Colorado wine-paired dinner at Jonesy's EatBar starting at 6:30 p.m. Tickets are ONLY $40 and a limited number is still available for purchase at Imbibe Denver. On Friday, Denver Off The Wagon will be releasing the Dubbel Entendre, a beer that DOTW brewed in collaboration with Denver Beer Co. This beer used all Belgian malts such as a Caramel Munich, a Caramel Vienne and a small amount of Special B. The beer is a rich amber copper color with dark fruits in the aroma and a balanced malty body. The hops used were German Northern Brewer which will balance out the sweetness of the "three tons" of Belgian Candy sugar and a set the brew to bubble with an Abby Yeast. 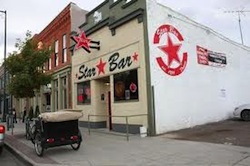 Saturday, February 23 is the actual second anniversary of the site being live and DOTW plans an all day party starting in the afternoon with a RiNo pub crawl and ending with a bash at Star Bar. Starting at 2 p.m., the DOTW crew will stop at Mile High Spirits, Our Mutual Friend, The Matchbox, River North Brewing, Blake Street Tavern, Breckenridge Brewery, and Whiskey Bar. Dubbel Entendre will be available on tap at most of these locations, as well as some drink specials like $4 cocktails at Mile High Spirits and happy hour pricing at The Matchbox.